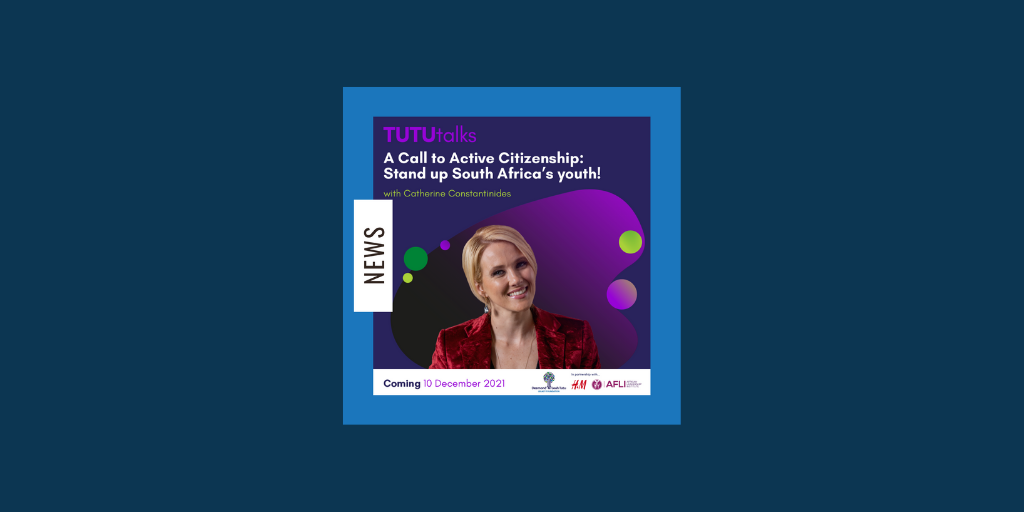 Ask yourself how it is that you actively engage with the challenges today’s world poses, asks Miss Earth South Africa director Catherine Constantinides in the fourth in the Desmond & Leah Tutu Legacy Foundation’s inspiring TutuTalks series.

The fourth and final Tutu Talks of 2021 is set to take place on Friday, 10 December, and is presented by the Foundation in partnership with H&M South Africa and the African Leadership Institute. In this talk, titled “A Call to Active Citizenship: Stand up, South Africa’s youth!” Constantinides calls on South Africa’s youth to become active citizens.

Constantinides leads by example. She is a 2013 Tutu African Oxford Fellow and a 2016 Mandela Washington Fellow who is passionately committed to real social change, especially in her home country, South Africa. Constantinides established her first business, a social enterprise, when she was 16 and was crowned the first Miss Earth South Africa in 2003. She is a United Nations (UN) human rights defender who actively advocates, in Geneva at the UN Human Rights Council, for the world’s most marginalised and vulnerable.

“The Desmond & Leah Tutu Legacy Foundation is using the Archbishop’s legacy of never shying away from courageous conversations to create a platform, through the TutuTalks series, that showcases moral and ethical leadership that is so evident in so many of South Africa’s young people,” says Foundation CEO Piyushi Kotecha.

“Active citizenship is the only way in which South African society will be able to cure the ills it faces, from unemployment, poverty and inequality to climate change,” says Kotecha.

Her call to action is timeous. The Foundation has joined hands with Defend our Democracy, whose week-long campaign against corruption in South Africa begins on Friday 3 December 2021 and builds up towards 9 December, which is marked annually across the globe as Anti-Corruption Day.

Defend our Democracy’s campaign culminates on 10 December, International Human Rights Day, providing an opportunity to reflect on how corruption affects basic rights. The theme for the week is “United in Action Against Corruption”, and calls for accountability, transparency and “recovery with integrity”, particularly in light of Covid-19 corruption.

“Throughout South African history, and indeed global history, it is young people who have brought about social change through their energetic campaigns for a better world. We call on our young people to again take up whatever fight appeals to them,” says Kotecha.

The Desmond & Leah Tutu Legacy Foundation is using the TutuTalks series to present new perspectives on the unresolved issues that civil society faces worldwide, and to uncover what moral and ethical leadership entails. The intention is not only to spread ideas, but also to empower young African leaders. This fourth edition in the series is presented in partnership with the African Leadership Institute and clothing retailer H&M.

At H&M, sustainability and the importance of women’s empowerment are central to who we are which is why we have partnered with the Desmond & Leah Tutu Legacy Foundation in its aim to promote courageous conversations on some of the world’s most intractable topics, and to promote the profiles of young African leaders, especially women,” says Caroline Nelson, H&M South Africa Country Manager.

The Foundation launched the TutuTalks series earlier this year, in the belief that giving dynamic and inspirational young African leaders an international platform will play a critical role in inspiring other young Africans to become ethical leaders in their schools, communities and societies.

The talk can be viewed on the Foundation’s website (www.events.tutu.org.za) from 10 December 2021.

There is no more wriggle room. Either the nations of the world work together to…

An olive leaf for our future

There is an olive tree in the courtyard at the Old Granary, which has been…