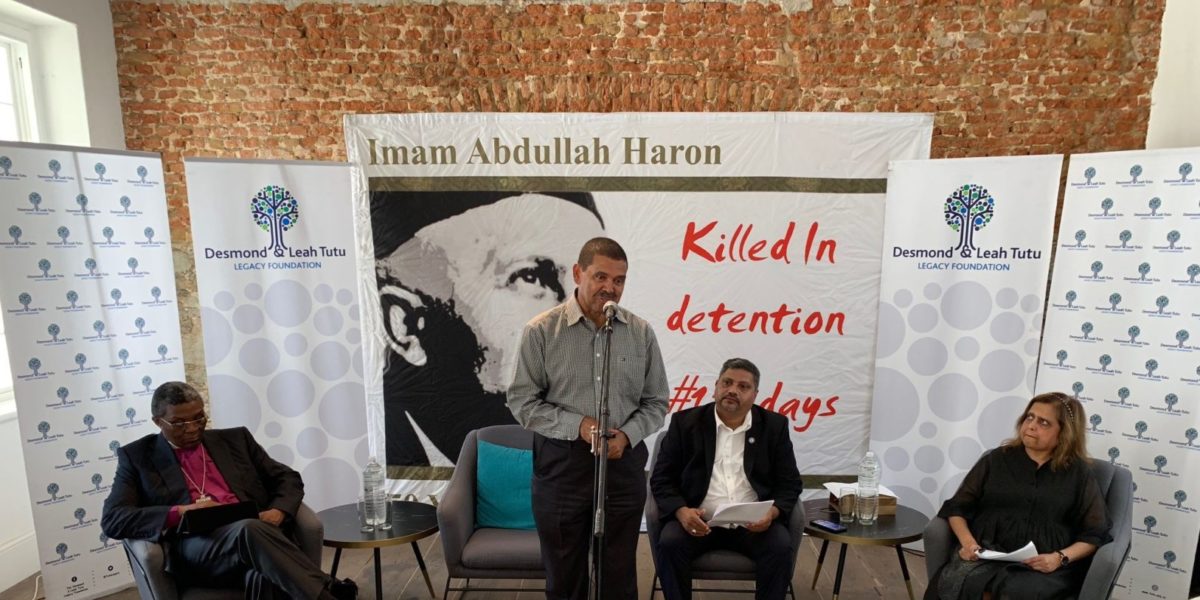 Participating in the first of a series of “Courageous Conversations” to be hosted by the Desmond & Leah Tutu Legacy Foundation, Secretary-General of the South African Council of Churches Bishop Malusi Mpumlwana called on faith communities to examine theology’s role in the objectification of women, while Professor Uma Mesthrie of the University of the Western Cape sharply criticised the South African Hindu community’s unwillingness to speak out against India’s new law excluding Muslims from citizenship.

Courageous Conversations is a new Tutu Legacy Foundation initiative that will bring national and international thought leaders together to discuss diverse and pressing challenges of our times. The first of the conversations – on the role of faith communities as advocates of social justice – was co-hosted by the Imam Haron Foundation and moderated by the Reverend Chris Nissen of the South African Human Rights Commission. The event was held on Wednesday evening, 24 hours prior to President Cyril Ramaphosa’s 2020 State of the Nation Address.

After rationalising the Council of Churches’ call for electoral reform, in 2017 – to get away from the system in which members of parliament depend for their jobs on party bosses they are supposed to supervise – Bishop Mpumlwana also called for gender reform in the leadership and language of faith communities. For theologians to criticise government without addressing their own sinfulness would be hypocritical.

Bishop Mpumlwana said faith was a unifying agent that was manipulated by some to divide people. The Council of Churches regularly engaged Jewish leaders about Palestine, for example, always seeking to emphasise that social justice should take precedence over religious affiliation. “If social justice and a culture of human rights determine our attitudes we won’t find religion dividing us.”

Speaking after Mpumlwana, the CEO of the Imam Haron Foundation, Cassiem Khan, said politicians were generally comfortable hosting clerics at their events and dinner tables, provided the clerics didn’t venture into political commentary. It was not faith leaders’ role to comfort politicians, but to hold them to account, Khan said.

The challenge for people of faith was to reject amorphous reassurances, and actively engage the detail. For example, he referred to the R1 Trillion said to have been lost to corruption in the recent past. Civil society should be informed how this money will be recovered, and participate in decisions on how it will then be used to create better safety, schools and health care.

Professor Mesthrie said there were various negative connotations to religion; zealotry, not least. Religion can be used to exclude people, such as in India, where Hindu nationalism was a vehicle for anti-Muslim discrimination.

While South Africans should support the anti-Citizen Amendment Act protests in India – as India supported South Africa’s non-racial liberation movement – the Western Cape Hindu Association had chosen to shy away from the issue, Professor Mesthrie said. This was presumably driven by a feeling that supporting the anti-CAA movement equated to being pro-Muslim, besides the fact that many members of the Hindi community in the province were of Gujarati origin, as Indian Prime Minister Narendra Modi is, Professor Mesthrie said.

Earlier, in her introduction to the Courageous Conversations series, CEO of the Tutu Legacy Foundation Piyushi Kotecha said human development was lagging behind technological advance. The world was in a crisis of deepening inequity, insecurity and mistrust.

The example of valueless political leadership was all around us, in corruption, greed and consumptiveness, prejudice, disregard and discrimination… gender violence, homophobia, Islamophobia, anti-Semitism, Kotecha said. “Who do we have to lead us away from this crisis? A bunch of strong, separatist men: Donald Trump, Boris Johnson, Narendra Modi, Vladimir Putin, Benjamin Netenyahu, Tayyip Erdogan, Xi Jinping…”

How should civil society appropriately respond? “The first thing to do is to summon the courage to speak out, to raise the thorniest issues and engage in the most difficult discussions. That was Archbishop Tutu’s recipe throughout his public life. He took sides: The side of morality, fairness and healing. The side of the vulnerable, the victimised and the dispossessed. He spoke truth, not just to power, but as a rallying cry for all who believe in justice,” Kotecha said.

While the Archbishop had retired from public life, human values don’t retire. The next Courageous Conversation, on the unfinished business of the TRC, was pencilled in for Human Rights Day next month.

A COURAGEOUS CONVERSATION ABOUT YOUTH, COVID-19 AND INEQUALITY

Accountability for GBV must be internalised and enforced