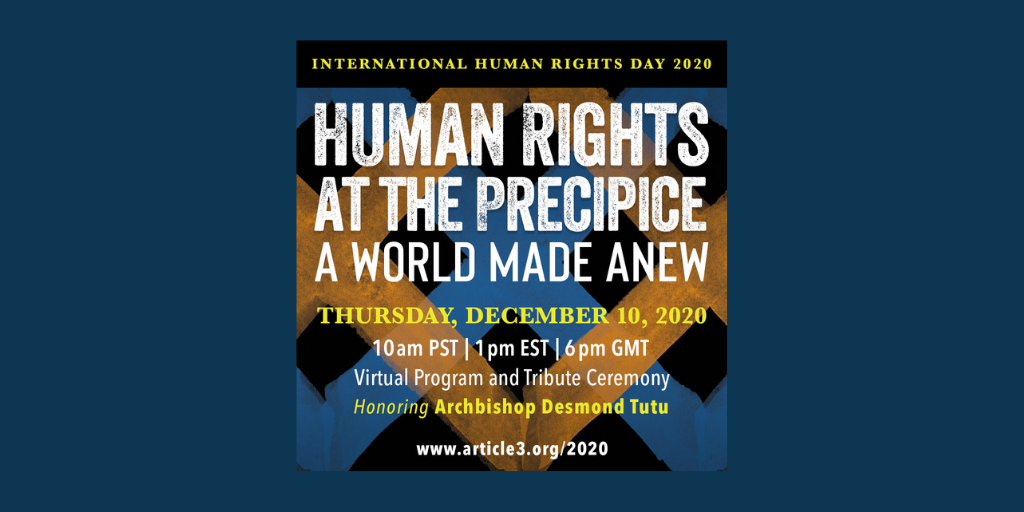 On the 36th anniversary of receiving the Nobel Peace Prize for his courageous opposition to apartheid, Archbishop Emeritus Desmond Tutu was last night named a Human Rights Global Treasure in a ceremony directed out of San Fransisco featuring a unique conversation between four former directors of United Nations Human Rights.

The 89-year-old Archbishop and Mrs Leah Tutu watched the livestream of the ceremony at home in Cape Town. The award was formally accepted on Archbishop Tutu’s behalf by the current Archbishop of Cape Town, Thabo Makgoba.

The Human Rights Global Treasure Award was initiated by US-based NGO article3.org, and presented in partnership with organisations including UNHR, Human Rights Watch, the Stanford Centre for Human Rights and International Justice, and the Desmond & Leah Tutu Legacy Foundation.

Van Zyl told a wonderful story speaking to the essence of Archbishop Tutu’s values and character. It related to a phone call he received from the Archbishop on the eve of former President PW Botha’s scheduled appearance before the commission (chaired by the Arch). “If you humiliate him you’re fired. Good night. Good luck. See you tomorrow,” the Arch said. Of course, the former President later claimed that the commission’s sole intent had been to humiliate him.

Strong themes of this component of the programme were the necessities to uphold the principle of Section 29 of the Universal Declaration of Human Rights, which emphasises people’s duties to each other (Ubuntu), and to de-Westernise the human rights movement.

Human rights “has been too Western-centric” and needed to get out of its comfort zone and forge links to fresh formations and thinking, including to Black Lives Matter, Fridays for Future and the Slavery Movement, said former President of Ireland and current leader of The Elders, Mary Robertson.

The climate justice movement was helpful in extracting people from their silos because it spoke to five layers of injustice: It disproportionately affected indigenous people and women, it encompassed inter-generational injustice, spoke to the injustices of industrialised versus developing nations, and injustices against nature and the planet, Robinson said.

Louise Arbour, now an eminent Canadian jurist, said it was important to recognise that both civil society and the United Nations had held Western-centric views on human rights. Until this faultline was addressed the world would struggle to address its inequalities. Now, with the focus on Covid and the post-Covid world, humanity couldn’t afford to continue prioritising political and economic rights over human interests, she said.

Dr Navi Pillay addressed the notion of human rights fatigue. Young people don’t have time for fatigue, she said. They’re too busy struggling against the crises of racism, Covid and the economic turmoil it’s wrought. Can you imagine, 11.1 million people in South Africa of working age don’t have jobs, she said.

Don’t ask me about fatigue, she added. She was energised by young people. “Eight-year-olds tell me it is common sense for all of us to have human rights.”

Prince Zeid Ra’ad Al Hussein said the beauty of the Universal Declaration of Human Rights was its plain language. The human rights field became elitist when it was over legalistic. There was a need to make the field more accessible, he said.

In the short term, Prince Al Hussein said, the orderly transfer of power to the Biden administration, and the level of its resolve to address racial inequality and injustice, would be critical to the human rights movement’s agenda to push back against business interests.

Tributes to the Arch

In accepting the award on Archbishop Tutu’s behalf, Archbishop Makgoba drew an analogy between Article One of the Universal Declaration on Human Rights, which states that all humans are born free and equal, and an impromptu speech Archbishop Tutu delivered at the University of Khartoum in 1990, shortly after Omar al-Bashir seized power in Sudan.  “If you are a believer, whether you are a Muslim, whether you are a Christian, whether you are a Hindu or a Buddhist, one of the common factors of these faiths is that no one of them has a low doctrine of human beings… each of these religions in their intrinsic nature compels their adherents to be people who strive for justice, for peace and for goodness. People of religion have no choice; where there is injustice and oppression, where people are treated as if they were less than who they are, those created in the image of God, you have no choice but to oppose, and oppose vehemently that injustice and oppression,” Archbishop Tutu told the students.

His Holiness the Dalai Lama termed Archbishop Tutu his senior spiritual leader, a trusted and respected friend. Among the foundations of their friendship was the Archbishop’s sense of humour. They were both elderly now, and travel was difficult, “but in the spiritual nature we are never separate, always together”, he said.

Mrs Machel, a member of The Elders, founded by her late husband President Nelson Mandela and previously chaired by Archbishop Tutu, addressed the Arch directly: “You are the embodiment of courage, integrity, standing for the disenfranchised and speaking truth to power. I am a humble learner from you, and I am very proud to be among your friends.”

Stevenson said he had always loved Archbishop Tutu because he kept standing up despite being told to sit down. He kept insisting on speaking the truth. When he looked around the US today, Stevenson said, the people were struggling to recover from slavery and colonialism because they hadn’t committed themselves to the kind of truth telling that Archbishop Tutu taught.

CEO of the Desmond & Leah Tutu Legacy Foundation Piyushi Kotecha said: “Over a lifetime of activism for fairness, dignity and justice for all, the Arch has had the courage to act on his choices: Friend of the underdog, voice of the voiceless, nemesis of unscrupulous leaders; he is a tailor who heals the tears and the tears in the fabric of humanity. A pastor to the world.”

Poet, Marc Bamuthi Joseph, the Artistic Director of Social Impact at the John F. Kennedy Center for the Performing Arts in Washington DC, termed the Archbishop a “generational radical”.

You can watch the ceremony here

Gender-based violence was at epidemic proportions in South Africa before the Covid19 pandemic. Conversations about…