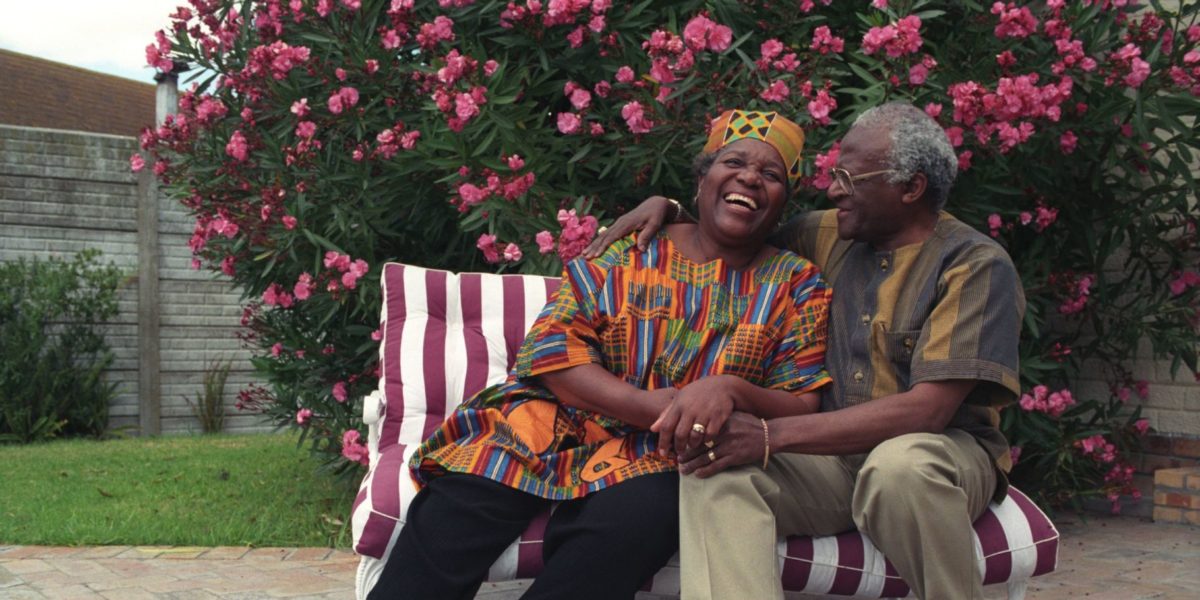 When Archbishop Emeritus Desmond Tutu receives awards, and there have been quite a few over the years, he deploys various strategies to communicate that there are others who do much of the work for which he receives the glory.

He says, for example, that we can only see him because he’s standing on their shoulders, but most take this with a pinch of salt. They think he’s being coy, or modest, for which they love him even more. But he understands the web of human inter-connectedness, and knows that it is true.

Many years ago, his proposal to Nomalizo Leah Shenxane was not as romantic as one might expect. His father thought marriage would be a good idea, the reserved young teacher said. Noting parental consent was culturally appropriate, as well as carrying the additional weight of his father having been principal of her high school.

She was a good catch. Besides her beauty, she came from an upright family – and she had brains and street-smarts. She had been a star pupil at school, and was on the cusp of qualifying as a teacher.

She knew his family well. Desmond was her best friend’s elder brother, and she was in and out of the family home – initially viewing her suitor-to-be as “nothing more than the headmaster’s stuck-up son”. He was a very reserved young man, who “looked silly in his cricket whites”, she remembers. They had reading in common, and their relationship blossomed into love.

“My father was very, very, very happy, especially because of Leah,” the Archbishop’s sister and Leah’s friend, Mrs Gloria Radebe, remembers the day. “We were a poor family, but my brother paid lobola and it was a beautiful wedding.”

Nomalizo Shenxane was of a generation of women who set aside professional ambitions to raise families, a generation of Black South Africans whose career choices were systemically limited, and a generation of mothers who provided structural and emotional steel to communities bullied by apartheid police and soldiers. A generation of unsung heroes.

She qualified as both a teacher and a nurse, but pursued neither profession. Instead, when times were tight, as they sometimes were – after her husband abandoned teaching to begin studying for a new career as a priest, for example – she took on part-time work to bring in extra income.

In the early 1970s, when he was employed by the University of Botswana, Lesotho and Swaziland, in Lesotho, she took a job as personal assistant to the rector. Later in the 1970s and early 1980s, she worked as director of the Domestic Workers and Employers Project at the Institute of Race Relations in Johannesburg, co-founding a domestic workers’ union.

But her real job was always in service of her husband and their children: Trevor, Thandeka, Nontombi and Mpho.

When the family returned to South Africa in 1975 after two fairly extensive periods in England – first, when the Archbishop studied at Kings College and worked at a parish in the suburbs of London and, a few years later when he returned to London as the Theological Education Fund’s director for Africa – the children were packed off to boarding school in Swaziland to avoid Bantu Education.

This necessitated long road trips to Mbabane. With a husband displaying neither aptitude nor interest in matters mechanical, rather than run the risk of breaking down and relying for help on racist country towns mechanics Mrs Tutu completed a mechanics course, herself.

She also took responsibility for catering, padkos (to avoid the indignity of buying food from prejudiced small town restaurant owners), logistics, navigation, and most of the driving. The Archbishop was able to perform his offices and other spiritual duties in silence on the road, secure in the knowledge that if the fan-belt snapped – as they seemed to do in those days – Mrs Tutu would replace it.

At home she played the roles of manager, chief cook and bottle washer, light-bulb changer, partner-in-Eucharist, lover, mother, sounding board, sharp-witted political analyst, adviser and critic. She shielded the family as best she could from threatening phone calls and vile critics, kept the home fires burning when the Archbishop was away, and maintained close family friendships in the community, in Soweto. She did all these things in order to provide a safe haven in which her husband and children could thrive.

“We (human beings) are made for loving. If we don’t love, we will be like plants without water,” the Archbishop says.

“He’s a very loving husband, and a very doting father who is very fond of his children,” Mrs Tutu confirms.

In celebrating the Archbishop and Mrs Tutu’s love story, we shine a light on an extraordinarily strong and tender woman, whose contribution to her husband, and through him, broader society, is grossly under-acknowledged.

She has had several shoulder surgeries over the years.

“Being deeply loved by someone gives you strength, while loving someone deeply gives you courage,” Lao Tzu said.

The Tutus have embodied this cycle of strength and courage, through their love, for 65 years.

Mrs Tutu is in the kitchen with a mallet, gently singing, hips swaying, thumping a slab of meat – overjoyed.

Although they have formally been living in Cape Town since his appointment as Archbishop in the 80s, she continues to call Soweto, home.

Today is a double celebration, she says: A celebration of the Archbishop’s 70th birthday, and of his return to good health from a bout of illness following prostate cancer surgery in the US in 1999, that had her fearing for the worst. She is celebrating the gift of his life.

Food preparations are intense. There’s a pile of meat and salads. Fires are lit outside, drinks are set out and umngqusho is cooking in a giant pot. The Archbishop is nowhere to be seen; he’s in his bedroom watching cricket.

“He takes pleasure in little things, the cricket and the rugby… he’s a fanatical rugby supporter, passionate, you know, we sit there and thrown things at the television screen,” son, Trevor says.

It’s an “open day” party; guests are invited to come and go at their leisure.

Each time more visitors arrive, the Archbishop is flushed from his bedroom (the cricket is clearly intense). Each time, he emerges with a little jig and a big smile on his face…

If the Archbishop is the star of the show, Mrs Tutu is its beating heart. The flowers are in bloom in her little garden sanctuary, the fish in the pond are colourful and fat, but she shines the brightest.

She laughs raucously, but out the corner of her eye she nurses the Archbishop. She monitors what he eats, always offering more. She knows where he is, what he’s doing, what he needs, when he’s thirsty – and it is her constant mission to provide it.

There’s has not been a typical marriage. Due to the nature of the Archbishop’s work, his travel schedule and engagement in the anti-apartheid struggle, they have been too often apart.

Perhaps now, at last, he will retire, and the couple will be able to spend more time together, doing nothing much and other things that “normal” couples do.

But, in her hands, he is roaring back to good health. His brisk morning walks are getting brisker, and human predicaments around the world are beating down his door, begging for his intervention.

He says he has retired, seemingly unaware that he is back poised on the runway – a new phase of intense global activism about to unfold.

She might have known: “He was fragile when we married, but his spirit was stronger than a lion. His inner self is much stronger than his body…”

The Archbishop gets up early. It is part of the discipline of his life. He gets through his early prayer routine, and does some exercise. In the old days, he walked at a fast clip through the neighbourhood, stopping only to pick up litter. These days, he exercises at home.

When the birds begin to sing, signalling the birth of Mrs Tutu’s new day, the Archbishop is preparing her coffee. His are not the most dab hands in the kitchen, but he loves to serve people. He serves her coffee in bed. During the Truth and Reconciliation Commission, that the Archbishop chaired, the State assigned a policeman to guard the front gate. He, too, was served an early morning beverage.

Through his seventies and deep into his eighties, the Archbishop’s schedule demanded extensive globe-trotting. Besides the myriad of social and environmental justice causes he supported, he chaired the group of retired world leaders known as The Elders, conducted fact-finding missions in the Holy Land for the United Nations, immersed himself in a global electronic health initiative, lectured, preached and attended dozens of book launches.

Now, the final chapter of his working life has been written. The couple have moved to a cottage in a retirement village in the country. There have been health scares over the past few years, with several admissions to hospital to treat stubborn infections, but he approaches his 89th birthday in October in good health.

Mrs Tutu’s role remains unchanged. Not much younger than her husband, she shrugs off her own chronic medical conditions and orthopaedic surgeries to remain at her post.

She manages the home and shopping, drives the car and changes light bulbs. She continues her roles as sharp-witted social commentator and family matriarch, and continues to nurture her treasured Archbishop – producing plates with four or five different colours of food to entice him to eat.

There is a wonderful and well-worn quotation about love attributed to AA Milne’s Winnie the Pooh, in which Pooh tells his best friend, Piglet: “If you live to be a hundred, I want to live to be a hundred minus one day, so I never have to live without you.”

The real author of these words is in fact a mystery, for although oft repeated they don’t appear in any of AA Milne’s books.

Perhaps they were written by Mrs Tutu.

The Old Granary, home to the Desmond & Leah Tutu Legacy Foundation, has a long…