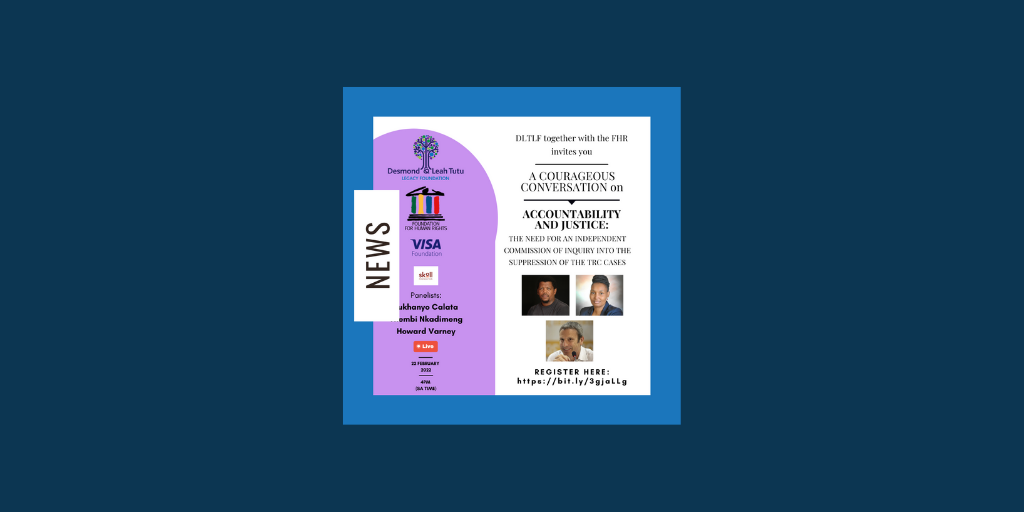 The Desmond and Leah Tutu Legacy Foundation (DLTLF), in partnership with the Foundation for Human Rights (FHR), is proud to share the details of our upcoming Courageous Conversation.

The first Courageous Conversation topic following the sad passing of Archbishop Desmond Tutu is something that was close to his heart, the Unfinished Business of the Truth and Reconciliation Commission (TRC). The conversation will take place virtually on February 22nd, at 16.00 SAST.

The DLTLF’s Courageous Conversation forms part of a series of dialogues that address topical issues in a critical and constructive manner. These dialogues discuss issues such as conflict, prejudice, inequality, nationalism and xenophobia, all issues that Archbishop Tutu was deeply passionate about. These dialogues look to not only identify the problems but also advocate for long-term solutions.

The focus of the first Courageous Conversation since the sad passing of the Archbishop Tutu will highlight:

● What justice means for the families of victims in the context of the deliberate suppression of the TRC cases by the democratic government and how to ensure that victims’ families are in the a of any justice project going forward;
● The call for the setting up of the independent commission of inquiry to investigate a political interference into the work of the National Prosecuting Authority (NPA) and the South African Police Service (SAPS) and the deliberate suppression of the cases arising from the Truth and Reconciliation Commission (TRC) by the Executive;
● The link between the lack of accountability for the crimes committed during the apartheid and the impunity of today in the face of the recently published report by the Zondo Commission.

The FHR, the Apartheid–Era Victims Families’ Group (AVFG) and civil society working on the issues of the Unfinished Business of the TRC have long believed that the suppression of the TRC cases by the Executive through the political interference into the work of the NPA and SAPS has been a form of the state capture. It is for this reason that the FHR and the AVFG together with support from the civil society organisations, including the DLTLF have called on the President to establish an independent commission of inquiry to investigate the suppression of TRC cases. The former commissioners of the Truth Commissioners addressed three letters to the President calling for the establishment of the independent commission of inquiry, in 2019, and two in 2021, which fell on the deaf ears. We demand justice for the Apartheid-era victims who feel let down by government in their pursuit of healing and closure. This much is owed to the families of victims who have long been waiting for justice and accountability.

In a speech in 2004, Tutu said: “As a Commission we could grant amnesty and had to do so with immediate effect when the applicant had satisfied all the legislated conditions. Thus, many perpetrators walked off scot free from quite early on in our work. In the case of victims, we could only recommend to the Government. Thus it seemed we were perpetrator friendly. It has been very unfortunate that apart from the urgent interim relief victims have waited for a very long time to get very much less than we had recommended. I think as a country we have let the victims down very badly. What we had recommended would still have been getting reconciliation very cheaply indeed. What we have offered the victims does us little credit as a nation.”

It is clear that the Archbishop Tutu felt that Apartheid era victims did not get the justice they deserved, the recommendations of the TRC were not implemented and we are still feeling the effects of this today.

Join us on Tuesday 22 February 2022 at 4pm (SA Time) as we look to unpack the process of the TRC and analyse what accountability needs to be taken when addressing prospective pathways to restoration and transition.

If we understand heritage as our historical lived legacy, then Heritage Day, marked on 24…