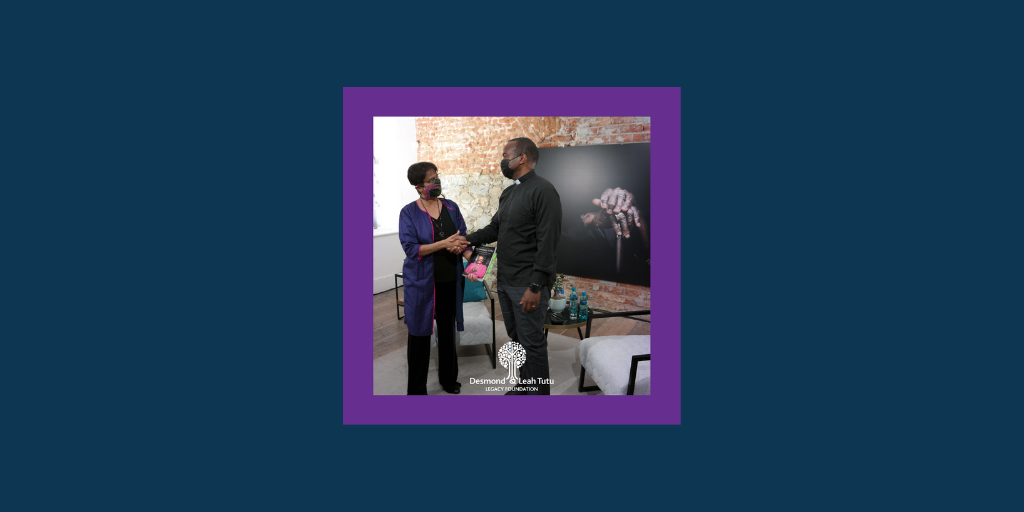 Welcome from all of us at the Desmond and Leah Tutu Legacy Foundation.

It seems deeply fitting that the launch of Dr Michael Battle’s insightful biography about the Arch should be the catalyst to bring us together tonight at the Foundation’s historical premises in Cape Town. It is our brave, first, public socially distanced gathering in this beautiful space since the Covid19 pandemic fundamentally changed the world we live in. Michael, we are privileged and proud to host you this evening.

A warm welcome to all of you who made time in your busy schedules to attend this launch. It is good to see you again. Welcome also to everyone who has joined us online from across Africa and the rest of the world.

This evening Michael launches his new book, Desmond Tutu, A Spiritual Biography of South Africa’s Confessor, published by Westminster John Knox Press, at a time when humanity, not just in South Africa or Africa but indeed all over the world, grapples with the impact of the pandemic, with the way it continues to rend the social fabric, exposing and leaving visible for all to see the fault-lines of inequality; a devastating pandemic that has inspired us at the Desmond and Leah Tutu Legacy Foundation to intensify our work of restoring justice, mutual understanding, community cohesion, and healing at every level of our existence.

In his Afterword to Michael’s book, the Arch poignantly writes:

“As I have wrestled with death and dying, I realize more and more how the spiritual, physical, intellectual and communal life are all interrelated. You cannot understand one without the other. Michael’s contribution here is to say this to all of us, in a world that is often prone to avoiding the spiritual. Life is the intersection of interrelation”.

Having known the Arch for more than 25 years now, Michael describes in his book the intersections and interrelations of the Arch’s iconic identity, as humanist, Anglican, as a black South African, a sage, reconciler, negotiator, global elder, intellectual, spiritual leader, Christian mystic, a man of deep prayer, a political priest, God’s child, confessor, mentor, saint, father figure, student and teacher. Himself an African American theologian, Michael describes the Arch as an exemplar of someone who has always managed to bring together being black and Christian identity in a world where neither can be taken for granted.

For our part, at the Desmond and Leah Tutu Legacy Foundation, we cannot fail to add to the Arch’s multiple identities as our courageous co-founder, father, life-long partner to Mama Leah, one of the founding fathers and mothers of our nation, a rabble-rouser for Peace with a sense of authority and a man with a sense of humour that has defused many a battle in the making.

Known for service leadership that centered on the intersecting values of respect, integrity, forgiveness, compassion, reconciliation and Ubuntu, the Arch is also very modest, which is one of the important reasons why Michael’s spiritual biography should be read, even by those who have read other biographies about him.

Framed with reference to the three Christian mystical stages of maturing in the life of God – namely purgation, illumination, and union – Michael’s book is a deep, spiritual and intellectual engagement with the Arch’s courageous lifelong journey with God; a journey that has always been inspired by his desire and commitment to protect, to liberate and to restore the dignity of the violated, the oppressed and the impoverished in society.

The Arch’s Sotho name “Mpilo”, meaning “health”, was given to him by his paternal grandmother after a miraculous recovery from an illness as an infant where he nearly died. It was the young Mpilo, Michael reminds us, who had a dream at the tender age of seven or eight in which the devil and Jesus were fighting over his soul. In the end, Jesus won, saying “You are God’s child”.  It should perhaps not come as a surprise, then, that this child of God later chose to add the English name “Desmond” because it means “courageous.”

I have to admit, I never knew how the Arch came by the name Desmond but in light of what Michael tells us, we can only marvel at the serendipity at work in a young man’s decision to embrace the name Desmond, only to become one of the most courageous individuals of our time.

His Holiness, the Dalai Lama writes in the Foreword of Michael’s book: “One must know that the spiritual life requires action in the world”. It is true that principled actions driven by deep spiritual commitment unite both these leaders and have involved them in profound change processes in their home countries and globally.

But what kind of action?

To genuinely transform deeply divided communities, (which, by the way, is some of the work Michael is involved in in the USA), we at the Desmond and Leah Legacy Foundation believe we must continue to create platforms for courageous dialogue, guided by the aspiration for justice, accountability, social cohesion and the genuine healing – of  individuals, communities, leaders, families, nations, and organizations, including faith organisations.

As recounted by Michael, the Arch laments the fact that as a young person he did not have positive role models. In fact, this dearth of courageous moral leadership is one key reason why curating and digitizing the Arch’s prolific writings – including his sermons and speeches as well as other legacy archival materials – is so important for future generations, so that today’s youth who will be tomorrow’s leaders, will forever have access to his thought on their own walks to freedom and justice.

We will definitely be using your new book, Michael, to mine input for the Foundation’s Knowledge Legacy and Ethical Leadership programmes, such is the value of its scholarship. Alongside other real-life, lived-memory perspectives, we will continue to hone the methodologies of research excavation for our legacy programme. Scholarship matters for authenticity.

The call for courageous leadership from peoples of all faith communities, as well as those with no faith tradition, is growing louder by the day and there is much work to do. How many leaders today are leading us AWAY from the impoverishment of apartheid and corruption, and towards the ethical values that serve, protect and nourish not only our peoples, but also the earth?

The deep scholarship of Michael’s book is a complex canvass of the Arch’s legacy and footprint viewed through the theological prisms of faith, love and spirituality. He rightly points out – and we will hear more about this now – that the way towards unity or union is through purgation and illumination.

We learn that for the Arch, life is fundamentally about interdependence, interrelationships, and the values of respect, integrity, forgiveness, compassion, reconciliation and Ubuntu. This mutual respect and communality are values we at the foundation subscribe to an advocate.

Over the last few weeks, we have all seen so clearly what happens when people’s humanity is denied (I think especially of what is happening in Palestine-Israel).  The end result is enemy creation, and ultimately genocide or even socio-cide. We simply cannot remain quiet and allow this to continue.  For humanity to prevail, love must prevail over hate. The alternative is obliteration.

As the Arch states in the Afterword:

“So, I may have taken a leading role in South Africa to fight against apartheid. I may have been in an historic position such as archbishop of Southern Africa. I may have won a Nobel Peace Prize. I may have led the Truth and Reconciliation Commission in South Africa. And I may have become a global elder. If I have done all of these things, however, without love, then I have done nothing. God is love. Spiritually, there is not much more to say than this.”

As a woman from a Hindu background and CEO of the Desmond and Leah Tutu Legacy Foundation whose founder counts as one of his best friends, the Dalai Lama, let me say that this is the vision we believe everyone has to adopt if we are going to heal humanity.  To genuinely treat each other with love, respect and dignity despite our differences, that transcendent love is the only thing that will heal and save our earth.

In closing and in the words of the Arch as quoted Michael: “In my theology there are no ordinary people. Each one of us, because we are God’s representative, God’s viceroy, God’s stand-in, and a God-carrier—each one of us is a very special person.”

Thank you to all the special people who have joined us tonight, physically and virtually, and to our collaborators who continue make our legacy work possible. Please remember to put the Arch’s 90th birthday, four months from today, in your calendar. We will keep you posted on this and all our other work.

Now let me hand over the proceedings to our moderator, Althea Banda-Hansmann who will introduce both herself and engage our author, Dr Michael Battle.