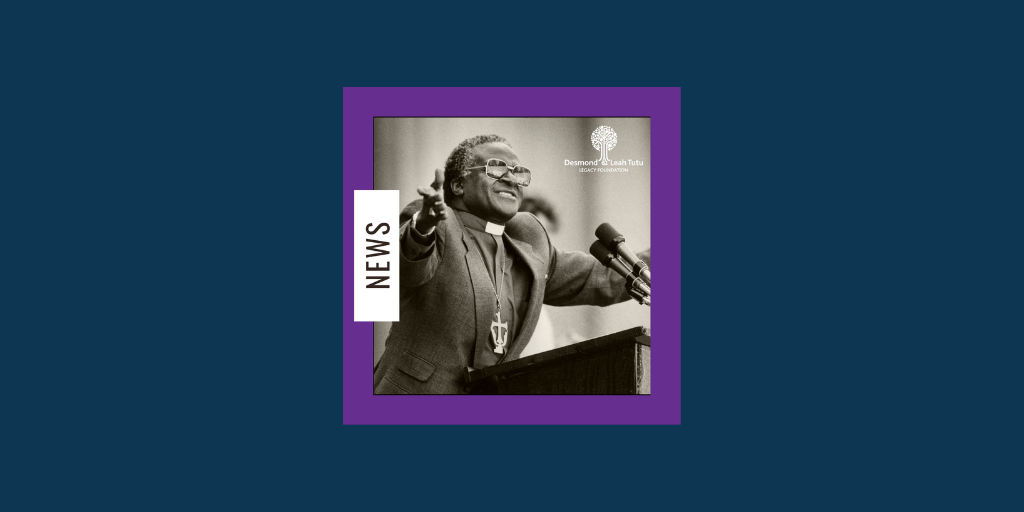 Another leak of financial documents, reported this week, shows how some of the world’s wealthiest and most powerful people hide the money they have accumulated through tax evasion and corruption, and is evidence of just how desperately the world needs more leaders with a firm moral compass.

Our world faces complex challenges that can only be overcome by leaders who have the mental agility needed to think differently, the humility required to properly listen to new ideas, and the compassion vital to shaping a future in which all people get to live fulfilling lives on a planet that is cared for.

There are painfully few of these leaders. They have always been rare.

Notably, in Archbishop Emeritus Desmond Tutu, who turns 90 on 7 October 2021, we have a shining example of just the type of leader needed: one who lives according to high moral principles, and who is willing to listen with compassion.

This is the Archbishop’s legacy: leadership that does not seek power for power’s sake, but that, once power is attained, uses it for the good of all people, and especially the vulnerable.

Archbishop Tutu’s leadership style is deeply rooted in his radical brand of Christianity, and yet South Africa and the world might not have had him as a religious leader. The career the young Archbishop-to-be picked for himself was teaching. And even that was not his first choice.

Back in the early 1950s Archbishop Tutu was admitted to study medicine at the University of the Witwatersrand, but his parents could not afford the tuition and he opted to study teaching on a government scholarship instead. But Archbishop Tutu’s career changed when the apartheid government, which had gained power in 1948, promulgated the Bantu Education Act in 1953. This legislation stripped down education standards for people of colour in South Africa, who the government wanted prepared only for the unskilled labour market.

Desmond Tutu and his newly married wife, Leah, also a teacher, jettisoned the career in protest. It was their first decisive act of defiance, and it held within it the tenor of countless others that followed: values-driven personal sacrifice and principled action, not just words.

Not that words have not been some of Archbishop Tutu’s most effective weapons, whether written or spoken.

Having left teaching, Desmond Tutu decided to become an Anglican priest. After studying theology in South Africa and England, and being ordained in 1961, Archbishop Tutu quickly rose within the ranks of the Anglican Church of Southern Africa. By the late-1970s he was elected general secretary of the South African Council of Churches (SACC). In this position of power, the Archbishop (he had most recently been Rector of Johannesburg’s St Mary’s Cathedral) used words against the apartheid government, to great effect.

First off, he turned the tables on the apartheid government, which justified its policy of keeping different races apart from each other on the Bible. Instead, he eloquently evoked a version of Christianity that was full of love for all people, and intent on treating each individual as a fully worthy child of God. He has never stopped preaching this version of Christianity. His embrace of the sanctity of other faiths is equally capacious.

It is hard now to describe how much moral weight Archbishop Tutu’s words, as a Christian authority, had during apartheid. They stung, and he meant them to.

He did not stop confronting those in power with the truth. Despite suffering opprobrium from some, and harassment from others, for using his authority as general secretary of the SACC to condemn apartheid on religious and generally moral terms, Archbishop Tutu continued to use words to shatter the preconceptions of apartheid.

In the 1970s and early 1980s, a time when most high-profile political leaders were jailed, exiled or banned, Archbishop Tutu was also able to use his profile as a religious leader to give rousing and defiant speeches at political funerals. The more he did so, the more he was asked to do so.

Archbishop Tutu steadfastly spoke out against apartheid, choosing to push for economic, sporting and cultural sanctions against South Africa instead of endorsing violence as a means of opposition. His stance won him the 1984 Nobel Peace Prize, much to the chagrin of the apartheid government, which knew that one of its most eloquent opponents could not now be muzzled without drawing international pressure.

As political and economic pressure on South Africa’s apartheid state heightened, from within the country and outside it, the Archbishop continued to speak at political funerals. These were often followed by clashes between heavily armed security forces and communities. These clashes led to more killings, which led to more funerals, new clashes and new killings. Tensions in South Africa were at a fast boil.

Then, in September 1989, Archbishop Tutu and other religious, civil and political leaders turned up the heat, leading a protest march in Cape Town that is said to have been the largest of its kind in 30 years.

Soon afterwards banned political parties, and individuals, were unbanned and radical change was in the air.

When apartheid eventually fell, shed as snaking lines of people cast their vote in 1994 – the first time that all South Africans, regardless of race or class, could do so – Archbishop Tutu did not end his quest for a world characterised by ubuntu, respect, forgiveness, integrity, reconciliation and compassion.

He kept his eye on these principles. He still does.

That is why he called the work of the Truth and Reconciliation Commission (TRC) “scandalously unfinished” more than a decade after he and his fellow TRC leaders recommended some 300 investigations into possible prosecutions coming from evidence led at the TRC. It transpired that a secret deal had been made for an informal blanket amnesty for perpetrators on both sides of the struggle against apartheid.

Once again, Archbishop Tutu put principle above political expediency in his outrage over the lack of prosecutions.

Forgiveness, the Archbishop has always been careful to explain, requires that the wrong is fearlessly addressed by both sides, and that the necessity for restitution is honoured. The TRC gave amnesty for full disclosure of the details of politically motivated crimes, and Archbishop Tutu and the commissioners recommended criminal investigations only where they ruled the full details of the crimes had not been given, or where the crimes committed were not politically motivated.

Archbishop Tutu retired from public life on his 79th birthday, 7 October 2010. But he did not stop speaking truth to power. Instead he spoke out on illegal arms deals, xenophobia, HIV/Aids, LGBTQI+ rights and human rights across Africa and the world.

The Archbishop is probably best described as a servant leader. He has chosen to stand up for the vulnerable, to speak out against injustice and to confront with the truth those who provide poor leadership. Too many heroes and leaders turn out to have feet of clay; he is not one of them.

He is a global citizen who embodies the values and virtues the world needs now.

Archbishop Tutu’s ideas about humanness, harmony and reconciliation have been influential throughout the world, and we at the Desmond & Leah Tutu Legacy Foundation are focused on ensuring they continue to do so. We want to promote leadership that is resolute about giving all people dignity, and that is acutely aware of humanity’s interdependence, our ability to participate and share with one another, and indeed our vulnerability. This African and relational concept of human dignity has yet to influence many outside sub-Saharan Africa.

Now, as we celebrate Archbishop Tutu’s 90th birthday, we look to the young leaders of today to speak truth to power when they confront challenges from climate change and ecological devastation to mass migration, famine, global corruption, threats to democracy and transnational organised crime. To them we hold up the shining example of a young boy, born 90 years ago in Klerksdorp, South Africa, on 7 October 1931, who held fast to his principles throughout his life and who now passes the baton on to them.

Corporations, governments and institutions that continue to invest in fossil fuels despite all the evidence…