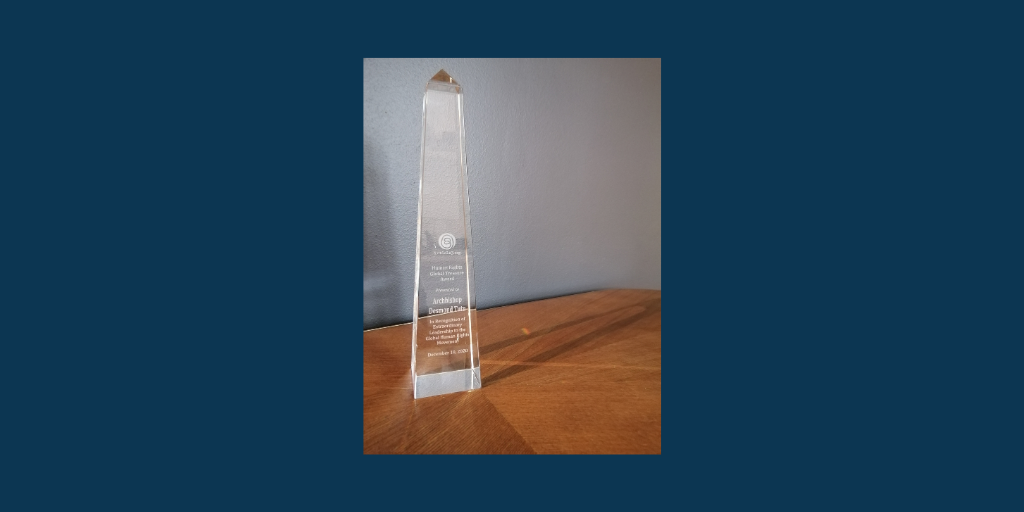 Archbishop Desmond Tutu is receiving the Human Rights Global Treasure Award from Article3.org, in recognition of his lifelong commitment to advancing peace, equity, equality, and human rights; and his unwavering commitment to speaking out on behalf of those often pushed to the margins of society. The award was announced today as part of the annual celebration of Human Rights Day, at a virtual event where peers paid tribute to Archbishop Desmond Tutu. The event also featured a deeper discussion of how to continue advancing human rights in a world beset by increasing polarization and a global pandemic.

“Archbishop Tutu is one of the most compassionate, unwavering, and committed leaders for human rights and dignity,” said Darian Swig, Founder of Article3.org. “He has always spoken up and taken action for those most in need of a voice and a spotlight. Archbishop Tutu’s lifetime of leadership and action is particularly timely in this moment. We are at the precipice, and the path forward for human rights will require us to extend unconditional love to others, be bold with our ideas, and commit to staying the course amidst unprecedented volatility. Archbishop Tutu’s resolve and his heart can serve as a powerful guide for all of us engaged in this space in the months and years ahead.”

Archbishop Tutu’s contributions to human rights are both myriad and transformational. Throughout his life, he has sought to center and elevate the dignity of all people and the role that dignity plays in just and democratic societies. Archbishop Tutu, who is an Elder Emeritus, was a leader in addressing and ending apartheid in South Africa; and in the decades since he has continued to consistently advocate for those facing violence, discrimination, and marginalization within their communities. He is a long-time advocate for gay and lesbian people around the globe, and has condemned persecution based on sexual orientation and gender identity in countries like Uganda. More recently, Archbishop Tutu has been an active voice in calling attention to the state-sanctioned violence against the Rohingya in Myanmar. Archbishop Tutu’s commitment to human rights earned him the Nobel Peace Prize in 1984.

The Human Rights Day event also featured a discussion with former UN High Commissioners for Human Rights Mary Robinson (who is Chair of The Elders), Navi Pillay, Prince Zeid Ra’ad Al Hussein (member of The Elders), and Louise Arbour, as well as other leaders from the human rights and peacebuilding space. The conversation focused on identifying pathways forward in a world wrought with conflict, a global pandemic, and increased ‘othering’ across societies.

“Now more than ever, it’s important that we see the common humanity in one another and understand the interconnectedness of ourselves, our communities, and our nations,” said Piyushi Kotecha, CEO of the Desmond & Leah Tutu Legacy Foundation. “We face enormous challenges, and addressing those challenges requires all of us to understand that conflict, violence, and persecution are never isolated – what affects one of us affects all of us. We are eager to kick-off a dialogue that helps grow the framework for how advocates, organizations, and peacebuilders can create a more just and equitable society.”

The first Human Rights Day occurred on December 10, 1948 – when the UN General Assembly adopted the Universal Declaration of Human Rights. For the last 72 years, that document has served as the fundamental framework for how human rights advocates and peacebuilders have approached building stronger, more peaceful, and more equitable communities for all – communities that center human dignity.

“Today’s Human Rights Day discussion provides an important opportunity to pause and reflect on where we’ve been over the last 72 years, and how we’ve changed the world – and human lives – for the better,” said Mary Robinson, Chair of The Elders, and former President of Ireland and former UN High Commissioner for Human Rights. “It’s easy to feel bleak and even overwhelmed by the challenges we face in the future. But we draw strength from one another and in the lessons we’ve learned together. When we are clear-eyed about our common humanity and shared responsibilities, we are without a doubt capable of solving the challenges before us.”

The was sponsored by Article3.org, Humanity United and the Stupski Foundation, in collaboration with The Philanthropy Workshop, UN Office of the High Commissioner for Human Rights, Virgin Unite and The Conduit.

The ceremony can be viewed here