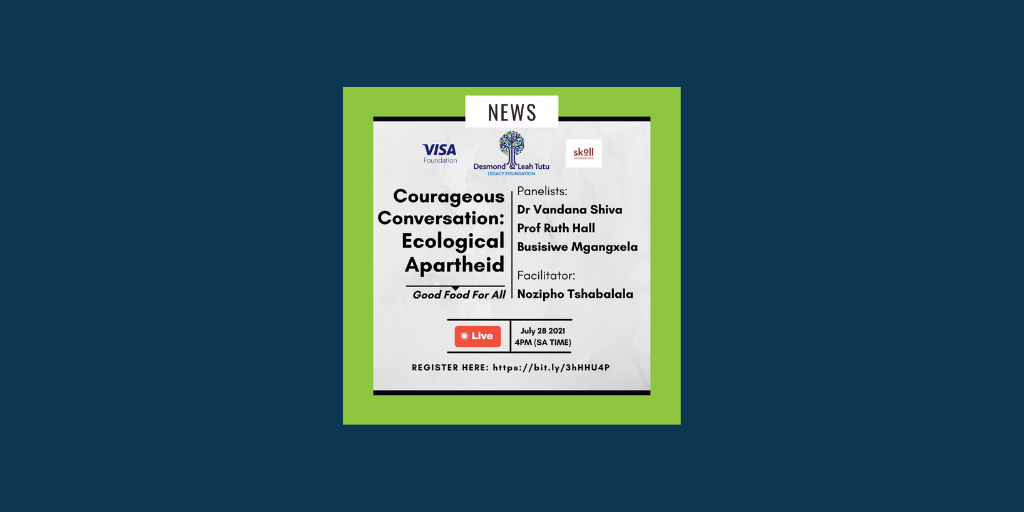 Join the Desmond & Leah Tutu Legacy Foundation on 28 July 2021 to find out what food and agriculture experts think South Africa can do to ensure that nutritious food is available to all its citizens.

The dialogue, titled “Ecological apartheid: good food for all”, will explore the concept of ecological apartheid and how the long-term effects of South Africa’s apartheid policies continue to scar the land and its people. It forms part of the Foundation’s Courageous Conversations series of public dialogues on difficult, topical issues that aims to activate the courage required to heal South African society from the myriad hurts it has suffered, recently and in the past.

The Foundation has gathered a panel of experts:

The 90-minute live-streamed discussion, which will be aired at 4pm on Wednesday 28 July, flows from the 2020 Desmond Tutu International Peace Lecture at which Archbishop Desmond Tutu called on all of us to join him in the fight for climate justice. In the same spirit of urgency, the Foundation’s call to action through this conversation is to bring to the surface what needs to be faced to dismantle ecological apartheid, and to identify how we might exercise our individual and collective agency to bring to bridge the gulf between humans and nature.

South Africa – and the world – needs the land, food systems and our bodies to heal from the negative effects of industrial farming techniques and philosophies, while working to ensure everyone everywhere has access to nutritious food.

In keeping with the approaching month-long events around South Africa’s Women’s Day (9 August), our all-women panel is an acknowledgement of these women’s expertise, and of the way in which women have too often been pushed aside when it comes to sharing knowledge.

The discussion will be facilitated by conversation strategist Nozipho Tshabalala, who recently delivered the second in the Foundation’s separate TutuTalks series, setting out how personal trauma led her to make a career out of moderating difficult conversations.

Tshabalala is an internationally acclaimed conversation strategist who is in demand for her rare and insightful ability to facilitate difficult conversations with courage, depth and breadth. She has worked with the World Bank and the Global Citizen international advocacy group, a movement that aims to catalyse action to end extreme poverty across the world by 2030. Tshabalala is the recipient of the African Leadership Institute’s Archbishop Tutu Fellowship and, in 2019, the African Youth Awards recognised her as one of the year’s Most Influential Young Africans.

The dialogue is delivered in collaboration with the Visa Foundation and the Skoll Foundation.

We, the undersigned organisations, are gravely concerned at the recent targeting of migrants in their…

Keep up the good fight

This December, we call on South Africans to be an active citizens and recommit to:…