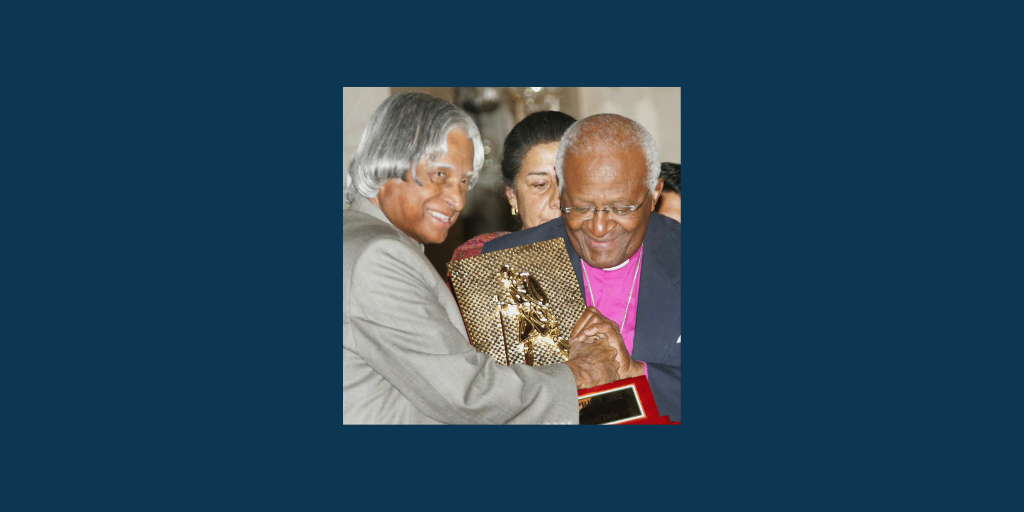 Thank you to the Gandhi Development Trust for this invitation on a day of remembrance and learning.

Today, marks a time when our country is at a point of plunging daily into xenophobia due to the failures of our present politics and lack of delivery of public goods.

Today, also marks Gandhi’s assassination because of his life-long struggle for justice and peace, by a fanatic from his own faith, one who claimed that “Gandhi had betrayed his Hindu religion and culture by supporting Muslims at the expense of Hindus”. This act was executed at the very place where Gandhi conducted multi-faith prayers every evening.

In every major faith, there is a clarion call for societal justice as the way to attain peace. It has taken visionary leaders like Gandhi and Archbishop Desmond Tutu to harness this.  We stand at this juncture of the need for principled and inclusive leadership once again.

Both were spiritual leaders who fought for the liberation of their countries from oppressive rule and there are some commonalities amongst them which are worth sharing.

Gandhi stood for the common cause of all India’s peoples in the struggle of freedom against British colonialism through the lived maxim of unity of purpose for all faiths in a context of divide and rule. His life’s purpose was to unite all the people of India by preaching respect and tolerance between all religions when partisan politics were tearing apart and fracturing the country’s religious groups into violent confrontations and deaths.

In South Africa, Tutu led the struggle for the freedom of South Africa from the platform of the South African Council of Churches and his own Anglican Church, from the streets, from the stadiums, from international platforms and funeral gatherings with equal fervour and conviction. His acute sensitivity towards diversity, like Gandhi’s, towards the “other” is renowned.

Gandhi’s driving belief was in Satyagraha “Holding firmly to Truth” and non-violent resistance to fight British oppression. Tutu’s was rooted in his theological understanding of the image of God in every person and Ubuntu, embracing diversity despite a distorted, nationalistic Christianity which legislated the separate development of people along hierarchical racial lines. Both mobilized and led nation-wide mass protests for their respective liberation causes in inclusive ways.

Born in different countries and contexts, it is interesting that Gandhi and Tutu as spiritual leaders shared some common philosophies and tenets that they held firm as guiding principles in their leadership.

These were an undying commitment to confront truths. They also, capaciously, embraced the power of love, diversity, plurality of religions and dialogue. It is fascinating to delve into the wealth of their rich, extensive writings on these subjects but that is the matter for another occasion to do full justice to them.

The alarm bells are ringing

The rise of present-day global fundamentalist politics is once again impacting upon religious sensitivities and allegiances. The South Africa state, as those in many other countries, is facing the challenges of poverty, the lack of a pro-poor political agenda, basic human dignities and it needs to align in both conscience and service to its peoples by forging a new compact.

We had a powerful one in pre-apartheid days which we need to resurrect urgently. What have learnt from that period? Our experience has been that South Africa has a proud history of the organization of interfaith collective mobilization in the fight against the horrors of apartheid.

It is salutary to recall the key moments that took place with the establishment of the South African chapter of the World Conference on Religion and Peace in 1984. In the United Kingdom, it was attended by Buddhists, Christians, Hindus, Jews and Sikhs.[1]

For the South African chapter, Dominie Gerrie Lubbe, a Dutch Reformed Church ( NGK ) minister was the moving spirit behind the World Conference on Religion and Peace in this country. The stated goal was resistance to a “Christian-Nationalist” racist state by establishing forums and dialogues to commit multi-faith groups and individuals to accelerate justice and peace in South Africa.

This also gave rise to the call for the first Annual Desmond Tutu Peace Lecture after Tutu was awarded the Nobel Peace prize in 1984 to remind “All people of faith to put into practice those sanctions and traditions of justice and peace which are inherent in their respective religions”.[2]

Tutu was due to deliver the first lecture himself, but it was promptly banned by the South African State on the grounds of safety, protection of the public and property alongside the refusal to allow six of the nine international religious leaders of the World Conference on Religion and Peace due to attend the lecture.

In 1987, a delegation went to Lusaka for a joint consultation with the exiled African National Conference titled “Religious Communities in a Post-Apartheid SA”. This was followed by a significant and milestone conference in 1990 in response to a call to develop a “religious charter which would encapsulate the rights expected by religious people” and to discuss the future of religion-state relations in a post-apartheid South Africa.

Subsequently, twenty-five representatives from different religious groupings gathered in June 1992 to produce the first draft which was circulated widely in synagogues, temples, mosques, universities, colleges and in various World Conference on Religion and Peace seminars, culminating in a National Inter-faith Conference in Pretoria. After many intensive days of debates, a Declaration on Religious Rights and Responsibilities was adopted.

The achievements of this remarkable pro-active process of multi-faith solidarity not only encompassed opposition across the race divides but galvanised deep co-operation on a multi-faith basis by issuing moral condemnations as well as addressing the co-option of people on oppressive agendas.

Thus, one can rejoice that we never had inter-communal religious warfare in South Africa. Not many countries can say that regarding religious prejudice.

Apartheid united us, brought us together with people who we may not otherwise have encountered. People of vision built this consciously to create a platform for the common respect for one other’s spirituality and spiritual practices.

This degree of mutual respect between the faiths that was displayed must once again become the measure of religious peace today.

This brief historical snapshot is shared to demonstrate the powerful impact of that chapter but also to remind ourselves of the interfaith foundations which undergirded our democratic gains, ones which meant this country never suffered religious warfare unlike other parts of the world.

Whilst it may be too bold to hold this up as a model, the rich weave of this process still resonates in South Africa, albeit more often in symbolic rather than substantive ways. The same commitment by way of urgent and consistent interfaith stances on xenophobia, political machinations and other contemporary ills need to carry the same force and demonstrable leadership with targeted demands upon the state today.

What can we promote today as we go forward?

Let’s commit to prevent humanitarian crises globally and in South Africa as we repeatedly witness the limits of political diplomacy. Both Gandhi and Tutu led by example against violence, bigotry and conflict so let us honour them by making a united and renewed call for:

The Power of Interfaith Solidarity event was a Mahatma Gandhi Symposium 2022 organised by the Gandhi Development Trust.

[2] The World Conference on Religion and Peace, South African Chapter

Remembering the road to freedom, and the path still to be taken

Today we commemorate one of the largest nails in the apartheid era’s coffin: the peace…