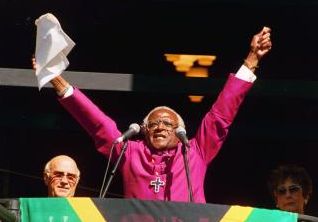 In the 26th year of South Africa’s democracy, it is irresponsible for the foundation representing former President FW De Klerk to debate the degree of awfulness of apartheid.
Instead of unequivocally re-committing the former President to the democratic ideal of one South Africa for all in response to an EFF demand that Mr De Klerk leave parliament before last week’s state of the nation address could proceed, by engaging in semantics and questioning whether apartheid was in fact a crime against humanity the Foundation re-opens old wounds.
Let us not reverse the gains we have made since apartheid.

South Africa is on an economic precipice. It is beset by radical poverty and inequity. Those who suffered most under apartheid continue to suffer most today. It is incumbent on leaders and former leaders of the white community, in particular, to  demonstrate the courage, magnanimity and compassion necessary to contribute to societal healing.

It is also incumbent on Nobel Peace Laureates to contribute to peace and unity of purpose.

Speaking after Mr De Klerk appeared before him at the Truth and Reconciliation Commission, in May 2017, the Archbishop described the former President’s unwillingness to accept National Party responsibility for its apartheid policy as “devastating” and said it almost drove him to tears.

“All that is required is to say that `we believed in this policy but it is a policy that brought about all of this suffering. It is a policy that killed people. Not by accident… I had hoped there would have been the possibility of statesmanship,” the Archbishop said.

The Desmond & Leah Tutu Legacy Foundation agrees with the South African Council of Churches that the FW De Klerk Foundation should withdraw its statement.

If we understand heritage as our historical lived legacy, then Heritage Day, marked on 24…

Tutu: Truth To Power exhibition to be opened on 25 March 2022 at the Desmond & Leah Tutu Legacy Foundation, Cape Town

On 25 March 2022, the Desmond and Leah Tutu Legacy Foundation will open an exciting…