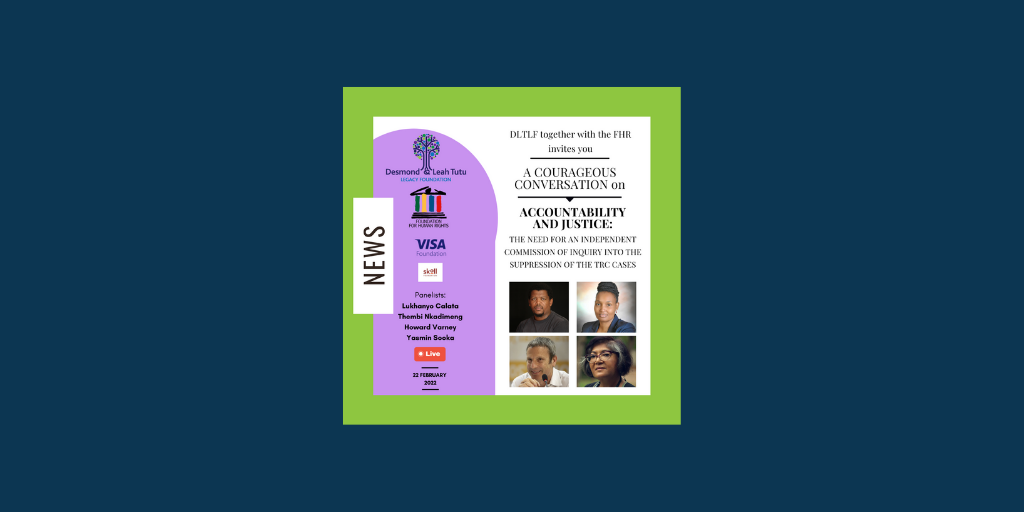 The first Desmond and Leah Tutu Legacy Foundation (DLTLF) Courageous Conversation of the year focused on the Unfinished Business of the Truth and Reconciliation Commission (TRC), and took place virtually on Tuesday 22 February

The DLTLF partnered with the Foundation for Human Rights (FHR) in developing the programme and holding the event. The DLTLF and the FHR are co-signatories in the call for the establishment of an open and independent Presidential commission of Inquiry into the suppression of Truth and Reconciliation Commission (TRC) cases by the Executive, SAPS and the NPA  , in which amnesty had been denied or not sought. The suppression of the TRC cases was a result of the political interference into the work of the NPA and SAPS by the Executive.

“In the case of the work of the TRC, it is widely acknowledged that the work remains incomplete and is characterised as an arena of both achievements and debate. The TRC provided an important platform that exposed the unspeakable crimes, and that is the point, that these were exposed for all South Africans and the World to witness the injustices and the trauma,” said the (DLTLF) CEO Piyushi Kotecha, who opened the Courageous Conversation topic yesterday

“It was a painful deal which was kept away from the families and their lawyers. We are all deeply cognisant that no social compact between government and the people can survive without justice. “Those who forget the past.. are doomed to repeat it” remains the ringing voice of Archbishop Tutu with as we deliberate the topic today,” added Kotecha.

Executive Director of the FHR, Hanif Vally explained the call for an independent commission of inquiry. “We are trying to draw a line in the sand to say no more impunity. We want the rule of law to be applied. There has been nothing done by the NPA to show that they are capable to act without fear or prejudice. We still don’t have enough details but this is an internal inquiry (announced by the Minister of Justice last year) rather than an independent one.

“We need to give answers to the people of this country. We need to allow for participation for victims and the public. We are not asking for a rerun but for prosecution. We are asking the NPA and SAPS to do their jobs,” added Vally. He reiterated that it was civil society that ensured the TRC hearings would be public and they would continue to push for a public hearing into the suppression of TRC cases.

Yasmin Sooka, a human rights lawyer and former TRC commissioner, said the call for an independent commission of inquiry was vital. “It is to pursue truth, justice and accountability for our society so we can come to grips with what happened in the past.”

She added: “on both sides you had key alleged perpetrators dying. It raises a further violation of the rights of victims. We have sent more than seven letters (to government) to which we had bland responses. We are sitting with an impasse that the president refuses to engage on this issue. This has an extraordinary impact on the ability of victims to access justice.”

Howard Varney, an advocate of the Johannesburg Bar who has represented victims’ families, said that a public commission of inquiry was the only option to expose what really happened. “Only an independent inquiry appointed by the president allowed to investigate, only then can the public see what took place. Victims, their families and other stakeholders will be able to be represented. If it’s an internal inquiry very little of that will happen.”

“The majority of these cases can never be resuscitated. The damage done to the fabric of society and wellbeing of the victims and their families is extensive to say the least. The delay caused by political interference has killed off those cases. The very least the families and our country deserve is to know is why,” concluded Mr Varney.

Deputy Minister of Co-operative Governance and Traditional Affairs,Thembi Nkadimeng, sister of the late Nokuthula Simelane, who was abducted, tortured, and forcibly disappeared by members of the Security Branch of the South African Police (SAP) in 1983, has repeatedly called for justice for apartheid-era crimes.

“We have had a series of court applications forcing the state and NPA to compel them to bring charges. Hopefully this case will sit on the 23rd of May. It’s a journey I wouldn’t wish for any family to undergo. Some other families will be spared of the pain. There has been some recognition, I’m not overlooking that but as long as I don’t have the full knowledge of what happened to my sister…,” she said.

Lukhanyo Calata who is also a social justice activist who has spent close to two decades pursuing justice for his father Fort Calata, one of the Cradock Four, anti-apartheid activists assassinated by apartheid security forces in 1985, said that it saddens him that families still have to go through this some 27 years into democracy.

He called for any secret amnesty deals done to be exposed in the spotlight of a public inquiry. “It’s time for those deals to be brought into the light. The only way that we can shine a light on them in a public independent commission of inquiry. They need to be investigated in the glaring light so that we as families can see what goes on there. This is why we are calling for this inquiry. It must be public and the Minister of Justice and President must hear us.”

Sooka added that the provision of reparation funds had yet to be fully utilised and paid out.  “We have 1.3 billion in the reparation funds. There were 22 000 names submitted. There has been very little transparency on how that money has been used. It’s currently administered by the department of justice. We are contemplating litigation against the issue. A public interest case is something we have been looking at for some time.”

Vally concluded by saying it was important that people support the call for an independent commission as they did to ensure the TRC hearings were made public. “We will keep fighting for this until we see justice done. We are not willing to compromise further.” Kotecha added that since the President pronounced on a renewed social compact, “we call upon him and the Executive to respect the will of the people for an open, just and transparent society in South Africa”.

We condemn acts of war by Russia and urge for urgent dialogues; no time to sit on the fence

“I wish I could shut up, but I can’t, and I won’t” The Global Legacy of Archbishop Emeritus Desmond Tutu