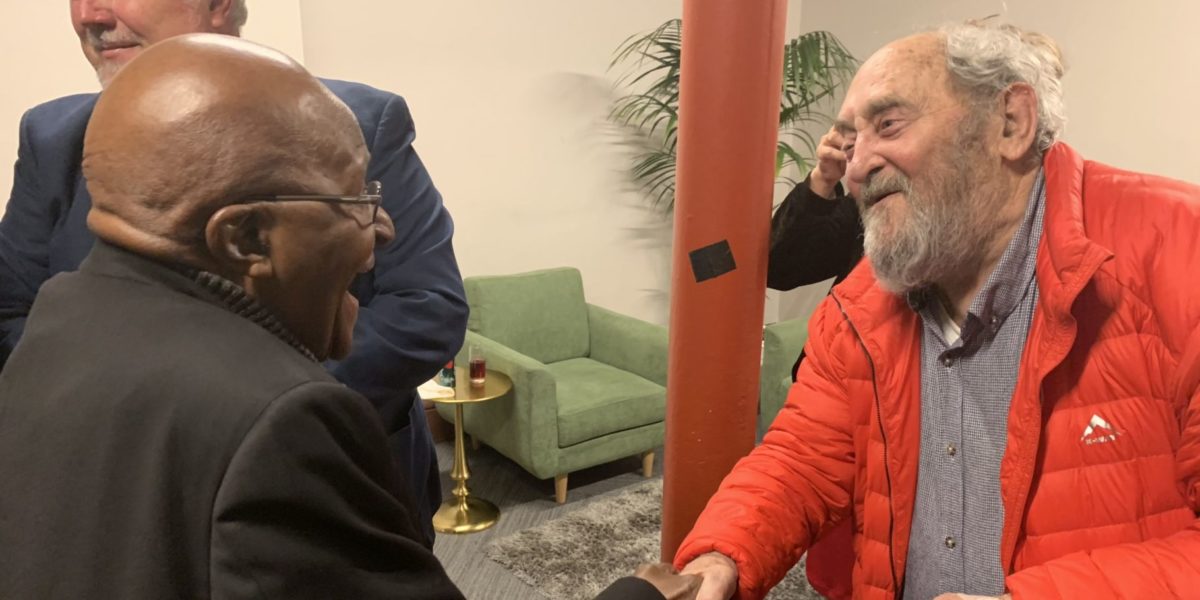 Denis Goldberg was a mensch, a human being of the highest integrity and honour who eschewed personal aggrandisement and consumptiveness.

His lifetime contribution to South Africa and its people was second to none. His passing today aged 87, following a lengthy battle against cancer, conducted with customary courage and grace, feels as if the nation has lost part of its soul.

Denis Goldberg’s pragmatic human values and natural compassion shone like a candle, attracting and connecting like-minded individuals and institutions wherever he went.

The Tutu Legacy Foundation was greatly honoured last year to work with him on hosting an exhibition on the Second World War. Based on research by eminent scientist and historians in Germany, the exhibition presented a decolonised history of the war. Titled, Forgotten Liberators, it focused on the contribution of two million conscripts from French and British colonies to defeating Nazism.

The Foundation is committed to continuing to honour Goldberg through strengthening its relationship to the Denis Goldberg Legacy Foundation.

The child of a progressive Jewish family in Cape Town, with roots in Lithuanian and the United Kingdom, Goldberg’s first taste of prison for his anti-apartheid activities in 1957 saw him serving four months without trial – alongside his mother.

He is best known as one of the Rivonia Trialists, a member of the Communist Party who helped establish the ANC’s armed wing and was sentenced with seven others, including Nelson Mandela and Walter Sisulu, in 1964, to life imprisonment. As the only white trialist to be convicted, he could not serve his sentence with his comrades on Robben Island, which was reserved for Black prisoners. He was instead incarcerated in Pretoria, for 22 years. But the Rivonia Trial was just one long chapter in his extraordinary life’s work…

In 1985 Goldberg was released from prison, where he obtained degrees in Public Administration, History and Geography, and Library Science – with a law degree in progress. He wasted little time leaving the country for exile in London, where he resumed his anti-apartheid work with customary vigour.

He returned home in 2002, initially working as an adviser to government ministers – and quickly becoming an active and revered member of the Hout Bay community, where he lived, particularly at the intersection of social development and the arts. He became a father figure to the Kronendal Music Academy, and began collecting South African art – on a scale that soon overwhelmed his home. In 2015, the non-profit Denis Goldberg Legacy Foundation Trust was established with the primary goal of establishing an arts, cultural and educational centre to be known as the Denis Goldberg House of Hope.

Hamba Kahle Denis Goldberg. May you rest in peace and rise in glory.

Desmond Tutu “Archbishop of the world” doesn’t do selective justice

Archbishop Emeritus Desmond Tutu can be described as the “Archbishop of the world”, said Professor…