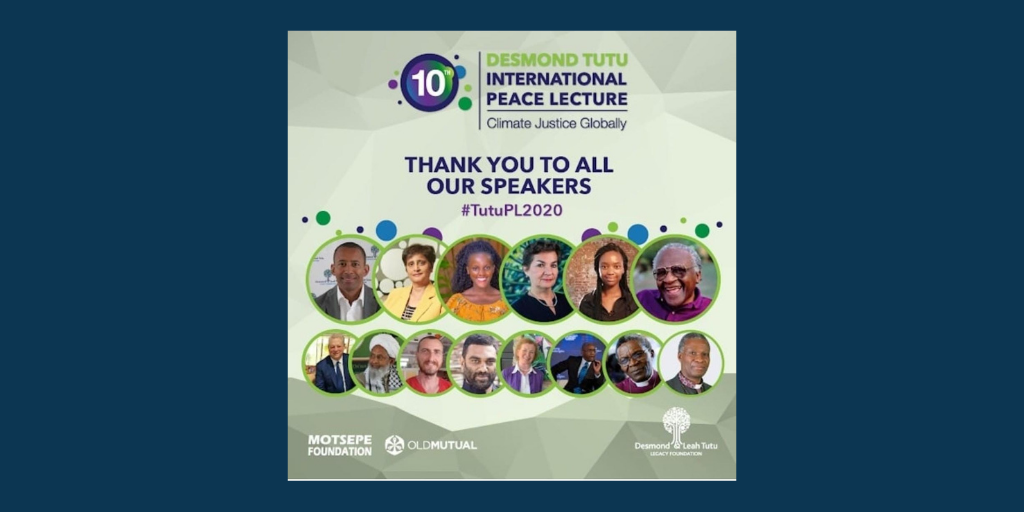 Action to curb global warming must be taken now, global leaders and youth activists said on the evening of 7 October 2020 during the 10th Desmond Tutu International Peace Lecture.

Anglican Archbishop Emeritus Desmond Tutu used the lecture, which takes place on his birthday every year, to again add his voice to the myriad others calling for urgent steps to adapt to and mitigate against the negative effects of climate change. These are already affecting the world’s most vulnerable people the worst, speaker after speaker said.

This year’s lecture was delivered by Christiana Figueres, who was executive secretary of the United Nations Framework Convention on Climate Change from 2010 to 2016, and young African environmental activists Ayakha Melithafa and Vanessa Nakate. Melithafa is a South African teenager who was spurred into action during the Western Cape’s severe 2017/18 water crisis. Ugandan Nakate founded the Rise Up movement that works to promote changes in legislation to protect the environment in several world regions.

“The destruction of the Earth’s environment is the human rights challenge of our time,” Tutu said, opening the evening’s proceedings.

The archbishop said that despite climate change having been on the global agenda for at least 25 years, the rate of greenhouse gas emissions continued to rise the world over, and “real-world impacts” had taken hold.

“Time is running out. We’re already experiencing loss of life and livelihood because of intensified storms, shortage of fresh water, spread of disease, rising food prices and the creation of climate refugees. The most devastating effects are visited on the poor – those with no involvement in creating the problem. A deep injustice,” he said.

The event, which took place on a curated online platform due to the global Covid-19 pandemic, included an address by former United States vice-president Al Gore, who won the 2007 Nobel Peace Prize for his efforts to disseminate greater knowledge of man-made climate change. He holds the prize jointly with the Intergovernmental Panel on Climate Change, a United Nations body dedicated to providing the world with objective scientific information relevant to understanding climate change.

Other speakers included Zimbabwean entrepreneur Strive Masiyiwa, a member of the Global Commission on Adaptation and the Desmond and Leah Tutu Legacy Foundation’s CEO, Piyushi Kotecha, and chairperson, Niclas Kjellström-Matseke.

To further honour the legacy of the Archbishop, Kotecha announced the establishment of the new Tutu Fund  – a vital tool in the campaign to inspire a drive for positive change.

“In addition to our public advocacy work, we aim to gather, collate and digitally archive the Arch’s life’s work and legacy from around the world, to make it accessible, to inspire and inform future generations. To nourish new leaders. To champion the medicine of respect and justice for all people. To continually re-insert values and humanity into the equations we face.

“We are not without hope. We have both old and new maps to pursue a better future. We have accumulated knowledge, our innate courage and compassion.” said Kotecha.

She invited the audience to be part of bringing the Arch’s vision for the future to fruition, and joining the foundation in the journey to become heritage makers.

The curated platform featured six commentators, to whom the foundation offers thanks. They are: economist Rajiv Joshi, founder and CEO of The B Team, established to catalyse environmentally conscious business practices; Reverend Rachel Mash, environmental coordinator of the Anglican Church of Southern Africa; Alia Kajee, an adviser in the Climate Support Programme with the German aid organisation GIZ and recently named one of Mail & Guardian’s top 200 Young South Africans for her civil society work; Akhona Xotyeni, an Eastern Cape activist recently recognised by the Mail & Guardian in its 2020 list of 200 Young South Africans and by the online publication Inside Education in its list of 100 South African Shining Stars for her contributions as a climate activist, Greg Swift, recently retired from decades of energy work at the Los Alamos National Laboratory in New Mexico, US where the main focus of his scientific research has been the invention and development of novel energy-conversion technologies and Margo Adonis, a registered candidate scientist who is founder of the nongovernmental organisation Visions of Change. Adonis is Miss Earth South Africa Ambassador for 2019/20.

The world depended on a new generation of thinkers like Melithafa and Nakate “to develop antidotes to the poison that we have bequeathed them”, said Kjellström-Matseke, referring to the injustices that emanate from greed, over-consumption and the world’s consumption-based economies.

The good news was that the global community has a recipe for creating a better future, Kjellström-Matseke said. This was the UN’s 17 Sustainable Development Goals, aimed at making the world more equitable, safer and more prosperous. They form part of the UN’s 2030 Agenda for Sustainable Development, adopted by all UN member states in 2015.

Nakate pointed to a number of recent extreme weather events such as the September 2020 floods in Sudan that killed around 100 people and left hundreds of thousands homeless, and 2019’s Cyclone Idai, which ripped through Mozambique, Zimbabwe and Malawi in March that year. Idai killed more than 1 300 people and destroyed homes, crops and other means of earning a living for hundreds of thousands of people.

“People do not have to live like this,” she said. “South Africa is Africa’s largest emitter of greenhouse gases, but South Africa also has rare influence for an African country. [The country needs] to use [its] position in the G20 and Brics countries to fight for the affected people throughout Africa on the global stage.”

Two crises converged in 2020, said Figueres: an economic crisis caused by the Covid-19 pandemic and the much larger climate change crisis.

“We did not ask for these crises to converge, but they have now … We need to ensure that we make 2020 the year of the convergence of solutions. We do not have the time or the financial capacity around the world to deal with each of these crises individually and sequentially. We have no other option but to bring them together in a harmonious whole and address them in an integrated fashion,” she said.

This is why it was critical that the economic recovery packages that are being designed must be climate-friendly and inclusive, she said, adding that the next decade would decide humanity’s future for hundreds of years.

Melithafa called for an end to passivity in the face of damaging human-induced climate change. “We need to stop putting each other down and criticising each other. We are powerful beyond measure and together we will truly make powerful and effective change if we stand up, take up space and move as a unit,” she said.

In addition to providing a platform to young African climate change activists via the lecture, the Desmond and Leah Tutu Legacy Foundation announced on the evening that it has established a Tutu Legacy Fund. The fund aims to “secure the archbishop’s example for the future and as part of his foundation’s efforts to foster a new, youth-led drive for positive change in Africa and globally”, the foundation said.

In support of the fund’s establishment is a 90@90 campaign that aims to raise R90- million during Tutu’s 90th year, which began on 7 October 2020 when he turned 89. The fund and campaign aim to address the urgent need to secure the legacy of “the Arch”, as he is affectionately known, for future generations.

The call for funds comes as the Covid-19 crisis has exposed the faultlines in communities and societies around the world. Incomes and livelihoods have been slashed, leaving the marginalised doubly vulnerable. Panic and denialism have been exploited to turn people against each other.

It is a time of fear, in which a number of unscrupulous political figures and self-serving economic interests seek to maintain dominance. However, it can also be a time of hope, as another vision of the world is born. One in which the unsustainability of inequality is acknowledged, in which people’s understanding of their common humanity produces new forms of activism, and in which those who have been left behind or oppressed are finally included.

The Duke and Duchess of Sussex, with baby Archie in hand, visited the Desmond &…

ISRAEL: WORLD AUTHORITY AND ACCOUNTABILITY MUST PREVAIL OVER NARROW INTERESTS