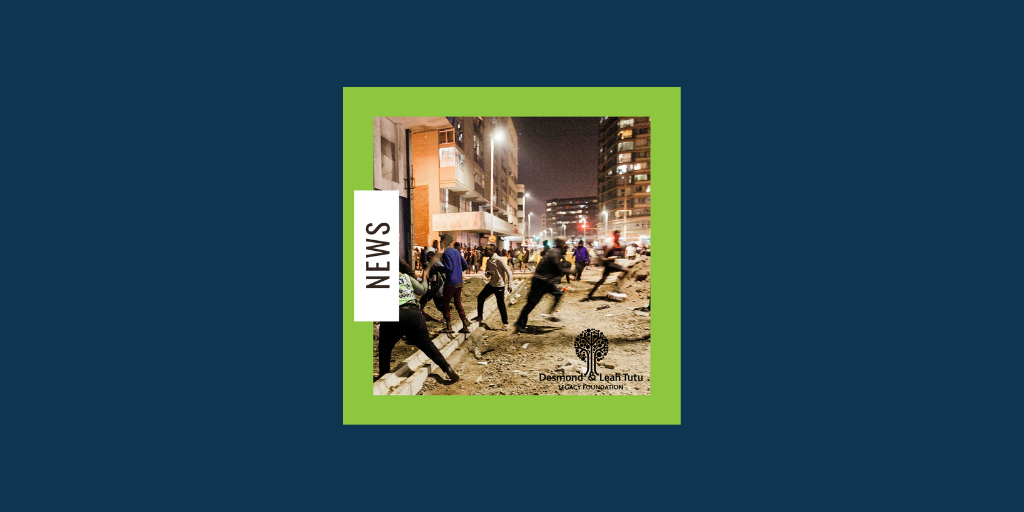 The Desmond & Leah Tutu Legacy Foundation calls for restraint from all sides now that the South African National Defence Force (SANDF) has been deployed to quell the violence, destruction and looting that has erupted across KwaZulu-Natal and Gauteng in the past few days.

We have watched in horror as the violence has led to several deaths and to the destruction and looting of private property. We will always defend the right to peaceful protest, but we will never condone violence, destruction or looting in the name of any cause.

The Foundation has many times condemned Zuma’s repeated flouting of the rule of law. It is this which led to the Constitutional Court to sentence him to 15 months’ incarceration for contempt of court.

We do not believe that all the destructive behaviour we have witnessed in the days since Zuma was jailed is linked to his incarceration. Where violence is linked to the former president’s jailing, we urge our fellows to consider that these acts do Zuma’s cause no good, they simply devastate lives and livelihoods.

Where it is driven by pure criminality, it must be condemned outright. However, the Foundation believes that much of it is driven by desperation and hunger. Far too many South Africans have been pushed over the edge by the terrible knock to the economy that has come in the form of Covid-19. Recent research shows that 13-million people in South Africa are unable to feed themselves, of which three-million are children.

This data comes from the National Income Dynamics Study – Coronavirus Rapid Mobile Survey (NIDS-CRAM), a broadly nationally-representative panel survey of South African individuals who are contacted every few months and asked a range of questions on their income and employment, their household welfare, receipt of grants, and about their knowledge and behaviour related to Covid-19.

Ironically, this violence, destruction and looting will affect the poor and vulnerable most. Already hundreds of millions of rands in damage has been caused. This will likely cost jobs, and push up prices. It may even be the last straw for some businesses, leading to their closure.

South Africa already suffered from the “triple challenge” of poverty, unemployment and inequality before the government imposed a series of national lockdowns aimed at curbing the spread of Covid-19, from March 2020. These have devastated an already hobbling economy, and pushed many into poverty. More than half (55%) of the population experiences poverty, with childhood poverty affecting 63% of children, according to the South African Medical Research Council.

We call for calm, and for faith in South Africa’s judicial system and in our Constitution. These, and not any one individual, are our safeguards against anarchy, and anarchy will do no one any good.

Across the world, descendants of unacknowledged victims of colonialism, slavery and racism are demanding acknowledgement…