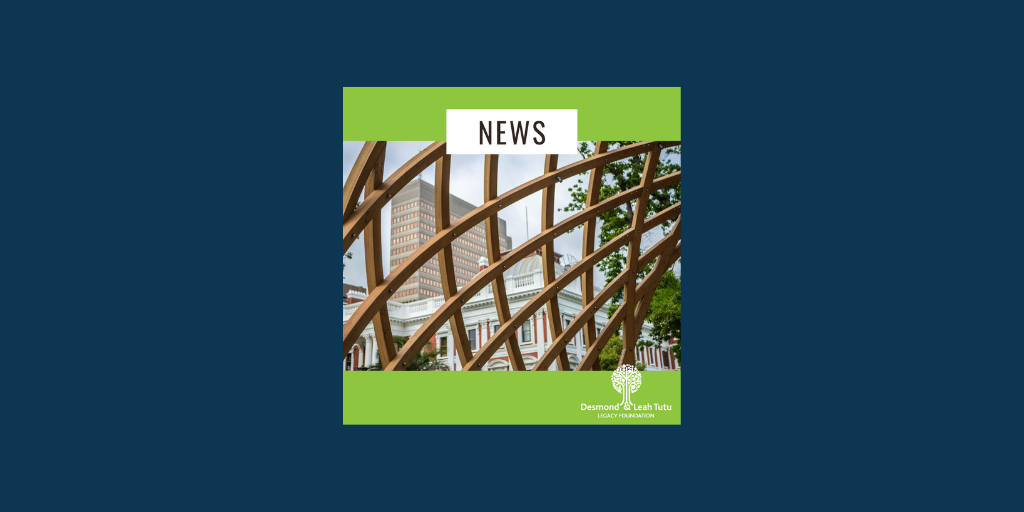 Ahead of Freedom Day, marked by South Africans on 27 April, the date on which, in 1994, all South Africans were for the first time ever able to vote for their choice of government, Piyushi Kotecha, CEO of the Desmond & Leah Tutu Legacy Foundation, sat down with Design Indaba founder Ravi Naidoo to explore how the Arch for Arch art installation was created in 2017 as a beacon of peace and democracy that honours Archbishop Emeritus Desmond Tutu, a revered and much-loved spiritual leader, icon of hope, and Nobel Peace Prize-winner.

A rich conversation between the two of them ensued, around the origins of the installation and the relevance of this initiative in the context of our constitutional democracy today. Here we share it with our friends and supporters:

Kotecha: What does this imposing piece signify?

Naidoo: This project holds special significance for South Africans, and the global community, and is one of the City of Cape Town’s most collaborative and poignant public works. The piece celebrates Archbishop Tutu and the legacy of love and joy he has built, as well as the role of art to bring about social change and serve as a catalyst to questions like “Where are we?”, “Where do we want to be?”, and “How do we get there?”.

Kotecha: What catalysed the project?

Naidoo: It was born out of a different concept entirely. I had initially been approached by the City of Cape Town to help fund and commission a mural of Archbishop Tutu on the side of the city’s Civic Centre. The Arch for Arch idea was proposed as a more engaging way to honour the Archbishop.

I met with renowned Norwegian architecture firm Snøhetta’s founder Kjetil Thorsen while I was in Norway speaking at a conference, and this seeded the start of a fruitful collaboration. I shared a bit about our projects – past and present – and told him I didn’t just want to invite him to come and talk at the Design Indaba Conference, I wanted to invite him to come and do.

Inspired in part by the many arches in Europe and the Nobel Peace Centre that was visible from the window during our meeting, Thorsen committed to working on the project pro bono, and the Arch for Arch was born. In Europe there are a lot of arches in commemoration of war. But we wanted to create a memorial to peace – and men of peace like Archbishop Tutu. It had to embody that spirit. That was the point of distinction.

Kotecha: How did you arrive at the concept behind it?

Naidoo: Because Archbishop Tutu played a big part in the dawn of our democracy, we decided that this project needed to celebrate and drive home the importance of protecting that democracy. The idea was to build on the legacy of South Africa’s foremost campaigner for democracy to create a platform for public participation in upholding the Constitution. This entailed a campaign that invited members of the public to comment on what the Constitution meant to them. Their answers were gathered together for a cumulative crowd-sourced piece that was published by Media24 towards the end of the project.

When we started to look deeper, we found a beautiful symmetry within the Constitution itself – 14 lines in the preamble, 14 chapters – and it seemed that the natural thing to do was to create 14 arcs for the Arch for Arch, representing the preamble and chapters of the Constitution, one of the most progressive in the world. We want people to remember Archbishop Tutu’s words to us: “If you want to do anything to protect my legacy, protect the Constitution.” If we protect our Constitution, we protect democracy in South Africa. They are two sides of the same coin.

Made from 14 arching strands of wood, each bearing a quote from one of the 14 lines in the Constitution’s preamble, the structure forms a dome signifying the founding principles on which the country is built. In the same way that an arch relies on a keystone to avoid collapse, so too do South African freedoms rely on the structure of the Constitution as a keystone of stable democracy.

Kotecha: How did you decide on the location?

Naidoo: Important for what it represented as well as whom it would allow to engage with Arch for Arch, the site – outside St George’s Cathedral, from where Archbishop Tutu launched many anti-apartheid protests, and close to Parliament, where South Africa’s laws are made – was chosen for its symbolism and accessibility.

It is poised at a confluence of belief systems, old and new, state and church, the oldest avenue in South Africa proved a poetic landing place – straddling the Archbishop’s seat (the cathedral) and the road that leads to Parliament. It lies between the two books and pillars of belief – the Bible and the Constitution.

The week we chose the location was symbolic for us in that it was also that week that the Constitutional Court used its power to censure former president Jacob Zuma for his misuse of public money. That was a moment in which we realised how fragile and yet how powerful democracy is.

Kotecha: What were the challenges you needed to overcome?

Naidoo: Because the site we chose straddles land owned by the Western Cape and by the national government, because the cathedral and the Parliamentary building are under the jurisdiction of different heritage councils, we had to bring together representatives of the Anglican Church, Parliament of South Africa and the City of Cape Town to form a steering committee that would navigate the necessary permissions and urban planning hurdles. These ranged from preserving heritage oak trees to conducting an archaeological survey due to the proximity of the site to the old Slave Lodge. This compromise between groups, and the working together towards a common goal in itself, is symbolic of Tutu’s legacy of peace-making.

Kotecha: How did you go about realising this project?

Naidoo: The next phase entailed the nuts and bolts – execution and planning. Enlisting local service providers was a crucial element. While Thorsen was leading the charge, we wanted to involve a local architect – the intellectual transfer and sharing of ideas is such a crucial part of any project we do. So, we enlisted Thomas Chapman of Local Studio, with whom we’d worked in the past. Master carpenters from Swissline Design came on board too, to fashion the timber arcs from Siberian larch, a wood chosen for its capacity to endure. We needed to create a piece that would preserve the Archbishop’s legacy into the future.

With the 2017 Design Indaba Conference looming, a dedication ceremony was planned to pledge the piece to Archbishop Tutu on the final day of the conference, using a carefully crafted replica. Bending wood is no small feat and Thomas found a boat builder – Croatian craftsman Dario Farci – in Joburg to create a scale model based on Thorsen’s design for the final piece.

Kotecha: Where is the scale model now?

Naidoo: The replica, which was created for the Design Indaba Conference, currently has pride of place in the gardens of the Constitutional Court in Johannesburg and will form the centrepiece of its soon-to-be re-landscaped grounds.

Kotecha: When did you first unveil the project?

Naidoo: The final day of the 2017 Design Indaba Conference culminated in a joyous celebration with Archbishop Tutu in attendance, complete with voices raised in song and guests from different walks of life.

The project returns us to the core questions of “What is design for?” and “Can design shift behaviour?”. I believe design is about how what is designed serves society and improves quality of life. In his address on the day, Archbishop Tutu recalled the destruction of apartheid saying to the people of South Africa: “All that we did was articulate your aspirations and remind you that you are not second-hand – you are not a feeble copy but a glorious original.”

Kotecha: What was your timeline for completion?

Naidoo: The clock was ticking to fulfil the pledge to have the final piece complete by the Arch’s 86th birthday, on 7 October 2017. With the process taking longer than planned due to the intricate nature of the project, the pressure was on …

We made it, and Arch for Arch was indeed launched on 7 October 2017.

Kotecha: Were there other stakeholders involved?

Naidoo: Up until then, we at Design Indaba had underwritten the entire endeavour, with no funding support from the government. At this point [7 October 2017], financial services company Liberty Holdings came on board as a partner, as a way to mark its 60th anniversary with something more lasting and poignant, and this gave the project its final push to the finish line.

Kotecha: Please tell us about the official launch?

Naidoo: The Design Indaba team set about planning the event – a celebration that included speakers and messages of goodwill from around the world, sent by such venerable humanitarians as the Dalai Lama [Tibet’s highest spiritual leader] and Bono of super-group U2. After the formal tributes, came the unveiling by myself, David Munro, CEO of Liberty Holdings, with the Archbishop and the mayor cutting the ribbon in a final flourish.

Kotecha: What does the Arch for Arch mean for Cape Town, South Africa and the world at large?

Naidoo: An experiential piece, the Arch for Arch allows anyone to walk through it or seek the shelter it provides. Its symbolism – a beacon of optimism and reminder of the value of the Constitution – is underpinned by its everyday practical use and the ease with which the community of Cape Town can engage with it. A place to meet a friend, propose marriage, do your homework, or even wait for your transport, this symbolic piece now forms part of the fabric of the city and local culture – with daily life, special events and cultural education all taking place within its orbit. It’s a communication platform, too – with dedicated wi-fi allowing visitors to access, when they are beneath the arcs, the installation’s backstory and the meaning behind it. Also, tourist guides stop at the artwork to tell the story of our democracy to travellers.

Kotecha: I believe that Arch for Arch also houses a sonnet dedicated to Archbishop Tutu, please tell us about that?

Naidoo: A dedication to Archbishop Tutu in the form of a sonnet was also included as part of the final piece, a tribute in words to live alongside the physical arch as a reminder of his contribution to his country. Here it is:

To the man who speaks truth to power,

Who stood always at the heart of the fight,

But shows the power of peace and calm.

Man of God, and Grandfather of the people

Whose broad shoulders comfort the nation.

We honour you, our Arch, and thank you.

The bowing wooden arches, at once strong and yielding,

Create a space a sanctuary and stillness for all,

Providing shelter but never blocking the view of the sky.

Archbishop Tutu, much loved, we honour you.

Accept this as our tribute to you.

This year, as we commemorate the dawn of South Africa’s democracy, the Desmond & Leah Tutu Legacy Foundation reiterates our resolve to stand up for our Constitution, admired worldwide for its breadth and progressiveness.

Arch for Arch cannot remain just another symbol. To have real, lasting impetus, a Constitution must have an integral effect on every action a government and its people take. Too often we fall short of this noble goal. This Freedom Day we call on all South Africans to defend our democracy, and demand from our leaders the fulfilment of the rights it enshrines while also reaffirming our resolve to uphold the responsibilities it demands of us.

Covid-19 vaccines: we can, and must, do more

More must be done, immediately, to ensure lower-income countries have faster access to  Covid-19 vaccines,…

PART I When Archbishop Emeritus Desmond Tutu receives awards, and there have been quite a…