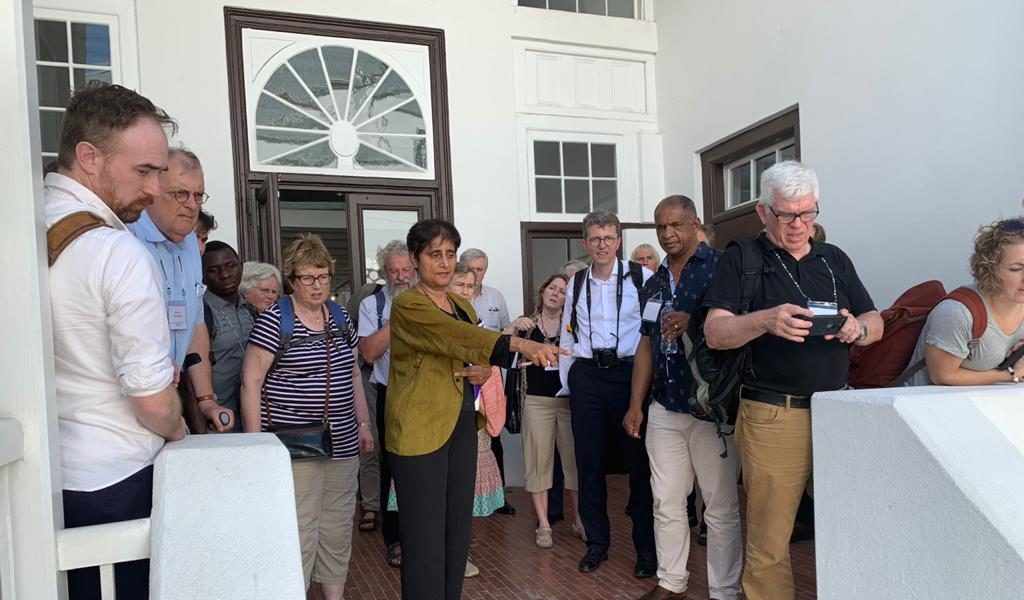 The Desmond & Leah Tutu Legacy Foundation was thrilled to welcome delegates attending the 13th International Bonhoeffer Conference in Stellenbosch to its premises at the Old Granary in Cape Town today.

Dietrich Bonhoeffer was a German theologian and anti-Nazi dissident whose writings on Christianity in the secular world retain their relevance today. He was executed in a Nazi concentration camp in 1945.

Speaking on religion and human rights at Emory University, Atlanta, in 1994, Archbishop Tutu said: “Hitler purported to be a Christian and saw no contradiction between his Christianity and perpetrating one of history’s most dastardly campaigns. What is even more disturbing is that he was supported in this massive crime against humanity by a significant group called German Christians. Mercifully there were those like Dietrich Bonhoeffer and others who opposed this madness, often at great cost to themselves as members of the confessing church. Christianity has often been perversely used in other instances to justify the iniquity of racism. In the USA the rabid haters of blacks, the Ku Klux Klan, have not balked at using a flaming cross as their much-feared symbol. One would have to travel far to find a more despicable example of blasphemy. Apartheid in South Africa was perpetrated not by pagans but by those who regarded themselves as devout Christians.”

The Archbishop concluded: “Religion which should produce peace, reconciliation, tolerance, respect for human rights has often promoted the opposite conditions. And yet the potential for great good in the impact and influence of religion remains and was recognised by the Parliament of the World’s Religions meeting last year in Chicago, which produced a call for a global ethic. That there would be no new global order unless there was first a global ethic which would be ‘a fundamental consensus concerning binding values, irrevocable standards and personal attitudes’”.

In the 2005 film, Bonhoeffer, the Archbishop described the German priest’s predicament thus: ““When God grabs you by the scruff of the neck, and although theoretically you have the freedom to say ‘no’, in another sense, actually, you can’t say no, because it’s like Jeremiah: ‘God, you have cheated me. You have called me to be a prophet against people that I love, and all that I proclaim are words of doom and judgement.’ And yet if I say, ‘I will shut up’, I can’t.”

In a message to the conference, delivered on Monday by Piyushi Kotecha, CEO of the Desmond & Leah Tutu Legacy Foundation, the Archbishop congratulated the conference organisers for the event’s forward-looking theme: How the coming generation is to go on living. While his generation was moving on, the struggle for a just, peaceful and sustainable world continued, he said.

Welcoming conference delegates to the Tutu Legacy Foundation today, Kotecha described Bonhoeffer as an early European proponent of Ubuntu. She compared the timelessness of his message of healing unity in the Nazi era to that of the Archbishop’s witness of reconciliatory justice during apartheid.

“Given the violent intolerance that surrounded them, they might have remained silent and got on with their work. Yet they had the courage to stand up for justice, not for themselves but for the rest of us. In our world of inequity, battling a climate emergency crying out for collective action, their bravery inspires anew,” Kotecha said.

Two pathways for the dismantling of Apartheid: the leadership of Nelson Mandela and Desmond Tutu