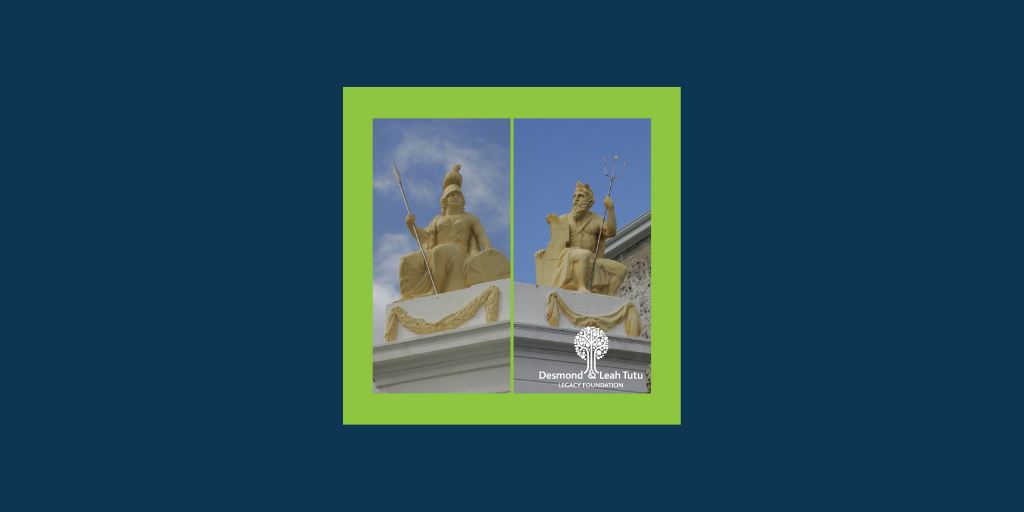 On the facade of Cape Town’s Old Granary building, home to the Desmond & Leah Tutu Legacy Foundation, is a coat of arms flanked by statues of the Roman sea god Neptune and Britannia, the female personification of Britain.

“Differences are not intended to separate, to alienate. We are different precisely in order to realise our need of one another,” says Archbishop Emeritus Desmond Tutu, who has spent his life opposing systems, like colonialism and apartheid, that are aimed at keeping apart people of different races.

This pediment decoration is a strong symbol of the Old Granary’s colonial past. When the building was erected between 1808 and 1813 the Cape was a British colony. Now the building is a symbol of another of the perennial themes of Archbishop Tutu’s quest to spread peace and tolerance among all people: reconciliation and healing.

Archbishop Tutu was born on 7 October 1931, in Klerksdorp in what is now the North West province. At that time South Africa was under British rule as the Union of South Africa, a self-governing dominion of the British Empire. He turned 17 in 1948, the year the National Party won the general (whites-only) election and started implementing its policy of apartheid – separateness – for each of the races.

Apartheid dominated Archbishop Tutu’s life until its dismantling in 1994, and, despite opposition from many of his fellows, he remained true to his principle of non-violent opposition to it.

From 1953, when Archbishop Tutu and the woman who in June 1955 became his wife – Nomalizo Leah Shenxane – left the teaching profession after the apartheid government introduced the Bantu Education Act, to today, Desmond Mpilo Tutu has emphasised our common humanity.

It was Archbishop Tutu who made the term ubuntu (I am because you are) a watchword well beyond South Africa’s borders.

By 1984 Archbishop Tutu’s brave and fiery activism against apartheid and any form of discrimination, with its strongly held principle of non-violence, had earned him international acclaim, and that year’s Nobel Peace Prize. In 1986 he was awarded the Martin Luther King Jr Award for Non-Violence.

Although he faced constant criticism from the majority of white South Africans, including hate mail and death threats, Archbishop Tutu did not back down. He became a patron of the United Democratic Front (UDF) anti-apartheid political movement in August 1983.

As political turmoil increased in the late 1980s, Archbishop Tutu, by then Archbishop of Cape Town, held firm to his principle of non-violence, while saying that he understood why many black South Africans felt violence was the only way of overcoming apartheid. Archbishop Tutu was involved in mediating conflicts between black protesters and the security forces at this time. He also worked to publicise the plight of six men sentenced to death after a protest march ended in a death. The sentences were commuted to life.

In February 1988, the government banned 17 black or multiracial organisations, including the UDF, and restricted the activities of trade unions. Two years later, in February 1990, the apartheid regime unbanned political parties and released several political prisoners, including Nelson Mandela, who spent his first night of freedom at Desmond and Leah Tutu’s home in Bishopscourt, Cape Town.

Archbishop Tutu lead the Truth and Reconciliation Commission (TRC) from 1996 to 1998, many times showing his deep empathy with victims who had suffered injustices during apartheid, and criticising those who had indulged in torture, attacks on civilians and other human rights abuses, regardless of political affiliation.

Since handing the five-volume report to Nelson Mandela, then president of South Africa, in 1998, Archbishop Tutu has championed many causes that fit in with his lifelong dedication to inclusion and reconciliation.

The Old Granary, where the Desmond & Leah Tutu Legacy Foundation has its home, is a colonial building, but it is now also a symbol of these goals. Within the walls erected by colonialists, crucial work to ensure Archbishop Tutu’s uncompromised bravery is celebrated, communicated and curated for posterity.

We don’t just commemorate heritage; we are heritage-makers

What we think and do is informed by our past, impacts on the world today,…

The liberation of Palestine will liberate Israel, too