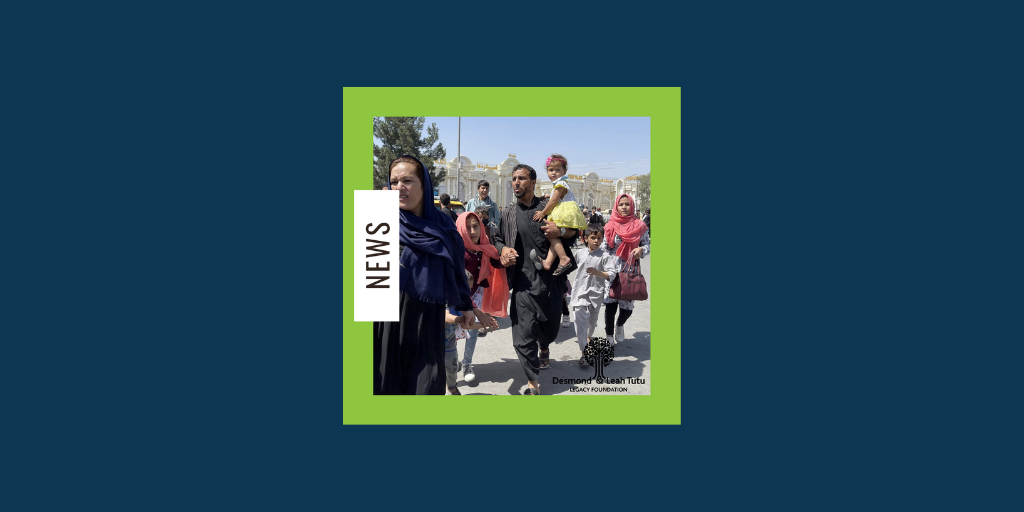 The Desmond & Leah Tutu Legacy Foundation stands with Afghanistan’s women, children and vulnerable and calls on the world to do the same to hold the Taliban to account and ensure citizens’ human rights are upheld. Images of panic and desperation at Kabul airport shocked the world this week as terrified Afghan citizens swamped flights in an attempt to flee after the Taliban’s swift takeover of their country.

The Taliban’s lightning advance to the capital city ended 20 years of Western-backed Afghan government rule, almost immediately after the United States and allied troops were withdrawn from Afghanistan. The Foundation is gravely concerned about reports that women journalists in that country have gone into hiding, and that women, in general, are staying off the streets in fear of being beaten up for not covering up their bodies.

It is heartening that the Taliban says there is no risk to women’s lives or safety, or to the lives of Afghans who provided services to Western forces over the past two decades. Yet the reports of reprisal killings and the massacre of surrendering Afghan government soldiers in recent weeks cast a shadow on guarantees of safety.

Our founder, Archbishop Emeritus Desmond Tutu, has set an example to the world in his focus on healing his own deeply divided society, and he continues to call for constructive dialogue, consolation and the healing of divisions globally. As a past Nobel Peace Prize winner, he stands with fellow laureate Malala Yousafzai, who has experienced Taliban violence first-hand and has expressed her concerns about what the regime change in Afghanistan might mean for the rights of women and girls.

The Foundation calls for level heads and moderation as the new Afghan leadership sets out its policies and decrees. It urges the Taliban not to erode the advances in terms of women’s empowerment made over the past 20 years.

In standing with Afghanistan’s citizens, the Foundation is also deeply concerned about a devastating potential refugee crisis resulting from this power shift. It appeals to individuals, bodies and governments around the world to support those who are displaced. The large powers who have been involved in the conflict in Afghanistan over many years, such as the United States and United Kingdom, must be held to account. They owe all assistance to the country’s people, including safe passage out for those at risk, and relocation and resettlement help.

The United Nations must also hold the Taliban accountable to international human and women’s rights laws and norms.

Archbishop Tutu’s belief in moral leadership and compassion for the voiceless are well known. The Foundation appeals to all the leaders who play a role in Afghanistan, or are able to influence a transition as painless and peaceful as possible, to draw on his example and to provide moral leadership in these uncertain times.

We don’t just commemorate heritage; we are heritage-makers

What we think and do is informed by our past, impacts on the world today,…

On the facade of Cape Town’s Old Granary building, home to the Desmond & Leah…

A new, limited-edition print by renowned artist William Kentridge and a fully sponsored stay at…