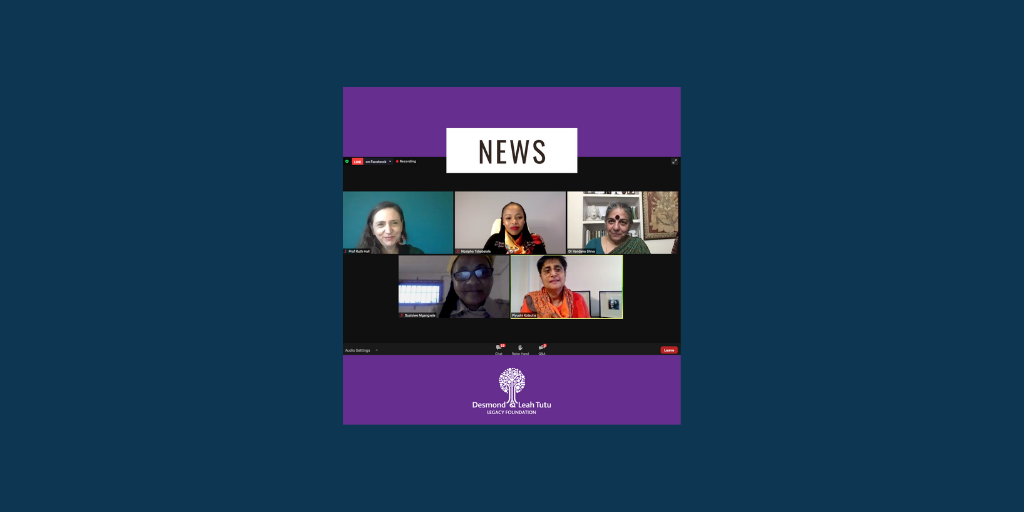 Developing nations need to take back their cultures and their food traditions, says scientist and food activist Dr Vandana Shiva.

The Courageous Conversations, a series of public dialogues on difficult, topical issues, aims to activate the courage required to heal society, particularly South African society, from the myriad hurts it has suffered, recently and in the past. The ecological apartheid discussion was moderated by conversation strategist Nozipho Tshabalala, who delivered the second in the Foundation’s TutuTalks series, on 22 June 2021.

Introducing the discussion, Foundation CEO Piyushi Kotecha pointed out that the recent spate of violence and looting that took place in South Africa, despite its myriad causes, had exposed the fault lines in South African society. South Africa is one of the world’s most unequal societies, and also suffers high levels of unemployment and poverty.

Kotecha said the Covid-19 pandemic has disrupted food systems worldwide. In South Africa the initial national lockdown in 2020, aimed at curbing the spread of the Sars-CoV-2 virus that causes Covid-19, led to small food distribution businesses, such as township food stalls, being unable to operate while the large supermarket companies benefited, she said.

This assertion was backed up by Shiva’s fellow panel member, Dr Ruth Hall of the Institute for Poverty, Land and Agrarian Studies at the University of the Western Cape. Hall said that South Africa’s national lockdown has been “quite profitable” for the country’s supermarket groups, leading to them posting a 15% profit in the 2020 financial year.

Shiva defines “ecological apartheid” as the illusion that humankind is separate from nature, in the same way that political apartheid in South Africa was based on the illusion that races are separate. She said that Earth will benefit if the developing world takes a stand against industrial agriculture, because industrial agriculture has the largest impact of any human system on ecosystems and human health.

Worldwide, food systems are dominated by large corporate entities because of the so-called “Green Revolution”, a set of agricultural changes that took place between 1950 and the late 1960s, Shiva says. These changes were the introduction of new technological and capital inputs, the adoption of modern scientific methods of farming, the use of high-yielding, genetically modified seed varieties, the use of chemical fertilisers and the consolidation of land holdings.

This revolution has squeezed out traditional farming methods, and led to the spread of monocultures and food that is abundant, but nutritionally poor. It has also led to what she terms the largest corporate takeover in human history, in which a few multinational corporations dominate seed production, farming, and food distribution and retail.

South Africa faces an existential crisis shaped by a lack of access to food for many, climate change, a lack of access to land for most of those who were dispossessed of it through colonialism and apartheid, and inequality, said Hall. “Government and civil society tend to address these separately, but we can’t do that anymore,” she said.

Nurse-turned-farmer Busisiwe Mgangxela, chair of the Eastern Cape Agroecology Farmers’ Association and of Women in Agriculture and Rural Development, said that in South Africa poor people, especially women, do not have access to clean, nutritional food. “It is only for the wealthy. That is ecological apartheid,” she said.

Mgangxela said her experience as a nurse had led her into farming, because poor nutrition is at the heart of many of the chronic illnesses that increasingly plague South African society – hypertension, diabetes, asthma and others.

Hall said the way in which South Africa’s government operates excludes small-scale farmers from markets, giving the example of the government’s tender system for school feeding schemes. This system favours large food retailers and excludes local farmers, who would be able to supply schools with nutritious food quickly. An added benefit of allowing local farmers to supply school feeding schemes is that a local food supply to a school would ensure that money remains in the local community, Hall said.

At the centre of South Africa’s food and health crisis is the enclosure and privatisation of land, and the only way to mend the situation is to do away with private land ownership in South Africa, said Hall.

South Africa needs targeted land reform, in higher rainfall areas and around towns and cities, so that more people have access to food. She called for expropriation to “get the right land”, so that people, particularly women, who live in urban and peri-urban areas have access to land on which they can grow food.

“This is the moment to continue the anti-apartheid legacy by opposing brutal law. Every minute 11 people are dying of hunger and that is not acceptable in a world of abundance. We need to find the courage to heal our Earth,” she said.

Closing the discussion, Kotecha pointed out that the Desmond & Leah Tutu Legacy Foundation’s home is a historic building in Cape Town that is called the Old Granary because, during colonial times it held grain grown at the Cape to feed the citizens of the old colonial powers.

It was apt, Kotecha said, that it was from this colonial-era granary that the Foundation was providing a platform for discourse on issues that needed to be boldly discussed. “This Old Granary must become a new granary of hope,” she said.

A tale of two balconies