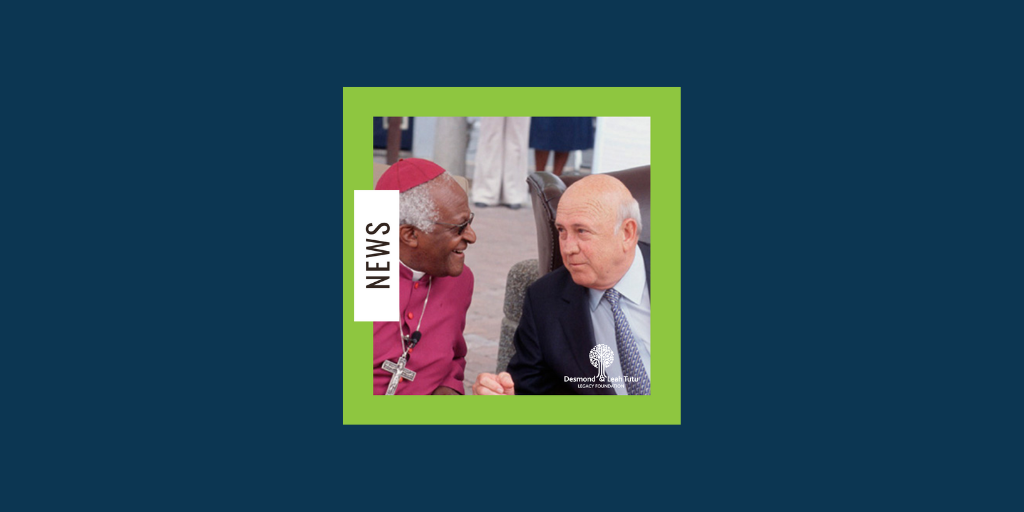 The Desmond & Leah Tutu Legacy Foundation sends its condolences to the De Klerk family on  the death of FW de Klerk,, South Africa’s last apartheid-era president, who played a pivotal part in the country’s transition to democracy.

“We send our condolences to the De Klerk family. It is never easy to lose a father,” says Foundation CEO Piyushi Kotecha.

“It is, however, sad that Mr de Klerk missed the many chances he had to fully reconcile with all South Africans by acknowledging the full extent of the damage caused by apartheid. That damage is with us today. We are in many ways a broken society. It is as our founder, Archbishop Emeritus Desmond Tutu, has said, ‘Mr de Klerk could have gone down in history as a truly great South African statesman, but he eroded his stature and became a small man, lacking magnanimity and generosity of spirit’,” she adds.

While De Klerk played a vital role in ending apartheid, he was never able to acknowledge the full extent of apartheid’s evil. As late as February 2020, he refused to acknowledge that apartheid was a crime against humanity, despite it being declared such by the United Nations in 1973.

On 2 February 1990, De Klerk stunned South Africa and the world when he announced to Parliament that he was unbanning the African National Congress, the South African Communist Party, the Pan Africanist Congress and other liberation movements, and that he was releasing Nelson Mandela unconditionally. This led to a multiparty negotiation process that led to South Africa’s first democratic election in April 1994, and Mandela’s inauguration as president on 10 May that year.

De Klerk’s adult life can be summed up in three phases. The first was as a faithful disciple of the apartheid ideology, which he implemented with ruthless efficiency and which brought him to prominence among his fellow apartheid-era cabinet ministers.

In the second, as a new president, De Klerk brokered a deal that changed the course of history and brought democracy to South Africa. In the third, he refused to acknowledge the full extent of the social, economic and political damage caused by apartheid.

“Nobody will ever be able to take away from Mr de Klerk the crucial role that he played in changing the course of history on 2 February 1990, and in the days and years that followed. It was a vital contribution to the relatively peaceful transformation of South Africa from oppression to freedom, and this was recognised by the wider world and in the invitation to him to stand alongside Nelson Mandela as a Nobel Peace Prize laureate,” says Kotecha.

“The third phase of De Klerk’s career, however, was a disappointment, a return to form in which he made unconvincing denials of apartheid-era atrocities at the Truth and Reconciliation Comission, chaired by Archbishop Tutu. He also refused to acknowledge apartheid as an atrocious crime against humanity. He went on to become something of an apologist for apartheid on the global speaking circuit. This is sadly a part of history best forgotten.”

"Covid-19 has wreaked havoc. It has destroyed lives and livelihoods and it has robbed us…

ANDREW MLANGENI: A GIANT WHO OPPOSED INJUSTICE TO HIS DYING DAY