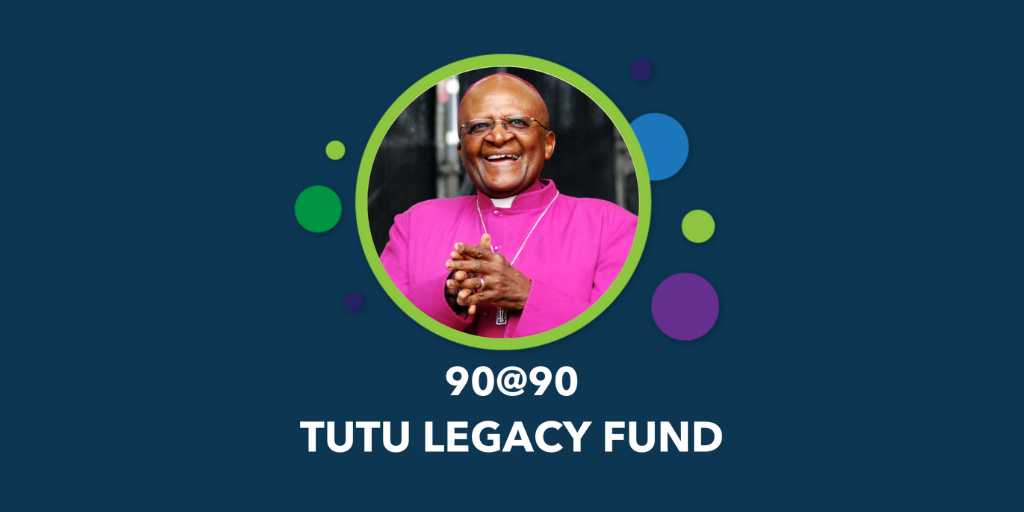 The Board of the Desmond and Leah Tutu Legacy Foundation invites you to support the Tutu Legacy Fund (TLF) to secure Archbishop Emeritus Desmond Tutu’s example for the future and as part of his Foundation’s efforts to foster a new, youth-led drive for positive change in Africa and globally.
In support of the Fund’s establishment, a 90@90 campaign is being mounted which aims to raise R90 million during Archbishop Tutu’s 90th year.

The Fund and campaign aim to address the urgent need to secure the legacy of “the Arch”, as he is affectionately known, for future generations.

Through the example of his own life and work, including in the struggle against apartheid, Desmond Tutu has brought the light of kindness, justice and healing where once the darkness of hate, injustice and cruelty reigned. He has given his all in pursuit of this mission.

Now the time has come, as Archbishop Emeritus Desmond Tutu enters his 90th year, to take up the torch and make sure it is passed on. We should all help.

The call for funds comes as the Covid-19 crisis has exposed the fault-lines in communities and societies around the world. Incomes and livelihoods have been slashed, leaving the marginalised doubly vulnerable. Panic and denialism have been exploited to turn people against each other.
It is a time of fear, as an old world run by a number of unscrupulous political figures and self-serving economic interests seek to maintain dominance.

However, it can also be a time of hope, as another vision of the world is born. One in which the unsustainability of inequality is acknowledged. One in which people’s understanding of their common humanity produces new forms of activism. And one in which those who have been left behind or oppressed are finally included.

Such is the vision of the Arch and of the Desmond & Leah Tutu Legacy Foundation as it seeks to activate his teachings.

Securing the Legacy
One of the great moral leaders of our time, Archbishop Emeritus Desmond Tutu won the Nobel Prize for Peace for his role in the struggle against apartheid in South Africa. Speaking truth to power and giving voice to the voiceless, he has, through the force of example, compelled the rich and powerful to heed their better angels and inspired popular movements for change.

However, the baton must now be passed to the youth. To those who have joined and led peaceful protests against racism and injustice on the streets of cities across the world as part of the Black Lives Matter (BLM) movement. To those campaigning against the scourge of gender-based violence and discrimination. And to those pressing for climate justice before it is too late.

The 90@90 campaign will seek to draw support from across the socio-economic spectrum, from grassroots communities to some of the world’s most influential business, cultural and thought leaders.
Thus, the aim of the campaign is not only to raise money to secure the Foundation’s operational and institutional future but to create a resource for change, with a particular focus on broadening the Foundation’s reach among women and youth, especially within vulnerable communities.

The Foundation’s work
The aim of the Tutu Legacy Fund is to further develop the three pillars of the Foundation’s present efforts which are implemented under the guiding concept of “The Courage to Heal”. For more information on our work, please visit: https://www.tutu.org.za/about-us/
Desmond Tutu’s living legacy is sustained institutionally beyond his lifetime for future generations.

To donate to the Tutu Legacy Fund, please visit https://www.givengain.com/cc/desmond–leah-tutu-legacy-foundation/

Should you need further information or wish to contribute to the Tutu Legacy Fund, please contact:
Desmond & Leah Tutu Legacy Foundation
Office of the CEO, jacob@tutu.org.za

ISRAEL: WORLD AUTHORITY AND ACCOUNTABILITY MUST PREVAIL OVER NARROW INTERESTS