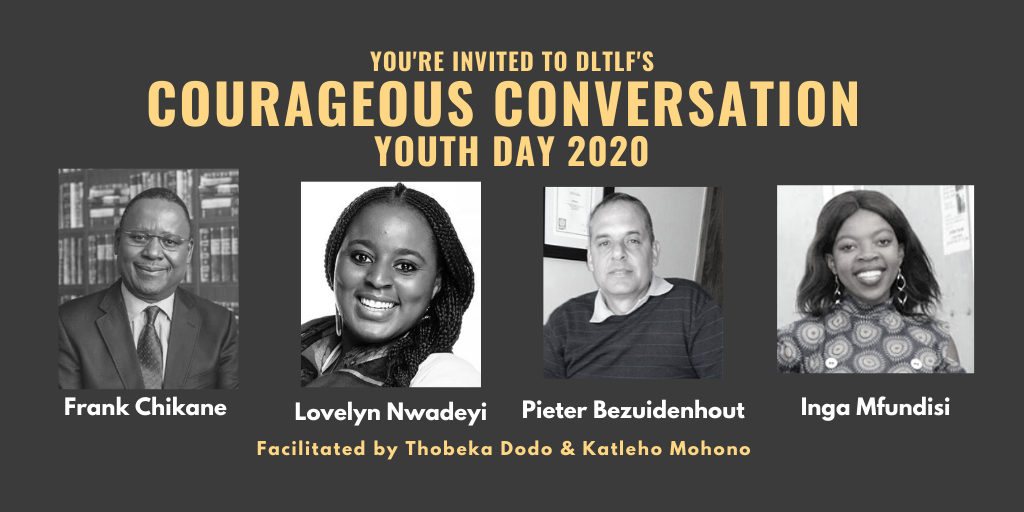 The Desmond & Leah Tutu Legacy Foundation has hosted a Youth Day conversation, bringing young and old together to make sense of the inequality laid starkly bare by the coronavirus pandemic.

The event, part of the Foundation’s Courageous Conversations series, saw veteran anti-apartheid cleric and former government leader, the Reverend Frank Chikane, exchange views with a matriculant from Hermanus, an Afrikaner pastor in the SANDF and a fiery social justice consultant who originally hails from Nigeria.

Chikane got proceedings underway with his memories of dashing back to Soweto from Springs on 16 June 1976 after learning that children had been shot. That evening, activists stayed in one another’s homes so that when the police arrived the person in the photograph they carried was not at home.

He quoted the legendary school principal of Orlando High, Thamsanqa Kambule, who said Soweto’s parents lacked their children’s courage to act against the injustice.

He later returned to this theme, saying his son, who was active in the Fees Must Fall movement, had levelled the same accusation at his generation of parents. They had dropped the baton. Questioned what the baton was, he said it was critical for parents to pass to their children knowledge of their history… so we know where we come from. where we are going, and avoid repeating previous generations’ mistakes.

Social justice consultant and activist, Lovelyn Nwadeyi, said the struggle of today’s youth was a struggle “to tell the truth and do the work” that needs to be done to create a better world. She called for courage, saying, “people we perceive to be courageous are not necessarily unafraid but the causes they believe in are more powerful than their fear”.

Asked about the role young Christians should play in advancing social justice, Nwadeyi said she wasn’t certain there were different roles for young and old Christians. “Our relationship to divinity determines our relationship to humanity,” she said, challenging churches to honestly state their positions on issues such as gender and xenophobia or risk losing young followers.

She said it was important for Christians to reconsider perceptions of what God is, and who Jesus represented. Jesus was not the “cute little white baby with blue eyes born on a haystack”, she said. He was a refugee, who was probably quite poor. He allowed women to challenge his authority, and he was a thorn in the flesh of political authority.

Pastor Pieter Bezuidenhout, who was conscripted into the apartheid army and is now employed by the SANDF, told a moving story of his first visit to Soweto, in 2012, with a group of sight-seeing fellow-soldiers. It was a great experience, on the one hand, but profoundly challenging on the other.

Determined to learn more about the past, he began speaking to people in the struggle, which led to him meeting Chikane. He has since completed a doctorate focusing on reconciliation and social justice.

The final speaker in the four-person panel was dynamic matriculant and member of the ama2000 generation, from Zwelihle township in Hermanus, Inga Mfundisi. She got involved in community development work at the age of 13 and, besides writing matric, is today a chess coach, poet, public speaker and Miss Teenage South Africa finalist.

What are the challenges facing her generation, she was asked? “I believe that, right now, this generation of youth should be taking up space… courage is being bold enough to take up space and inspire others.”

Back at school for the past few weeks, following the coronavirus lockdown, Mfundisi said learners were fearful, and that it was critical that they face their fears together. It was also important for young people, including those living in rural and outlying areas, to be exposed to accurate information.

Drawing matters to a close, Tutu Legacy Foundation CEO Piyushi Kotecha introduced the webinar audience to the Foundation’s programmes and alignment. The Foundation’s over-arching theme – Courage to Heal  – was drawn directly from Archbishop Tutu’s history of courage, agency, faith and determination to speak truth to power.

Covid-19 had exposed horrible inequity and unfairness. It is young people desperate to escape the cycle of poverty who will bear the long-term consequences of disruptions to their education, the losses of their parents jobs, and the social impacts of lockdown – including the surge in gender-based violence.

“Today we commemorate the generation of young people of 1976, who were willing to pay the highest price, besides sacrificing their schooling, because the lives of black children mattered.

“Collins Khosa was born four years later. His life mattered. He survived an apartheid upbringing, but in post-apartheid South Africa he couldn’t survive being Black. George Floyd’s life mattered, too. But inequality in America laid the foundations for him to be lynched in the street.”

“As a foundation representing Archbishop Emeritus Tutu, we have a particular duty to facilitate conversations about difficult human conditions. Conversations that speak truth to those who don’t necessarily want to hear it, those in power. As the Arch often said, when faced with injustice he can’t shut up even if he tries,” Kotecha said.

All have responsibilities to address inequality, she said. It is an inter-generational responsibility because the decisions we take today will directly shape tomorrow’s world.

MAKE 16 DAYS OF ACTIVISM A LAUNCHPAD FOR CIVIL SOCIETY GROWTH

This year has been unlike any other. Besides the public health and economic destruction wrought…